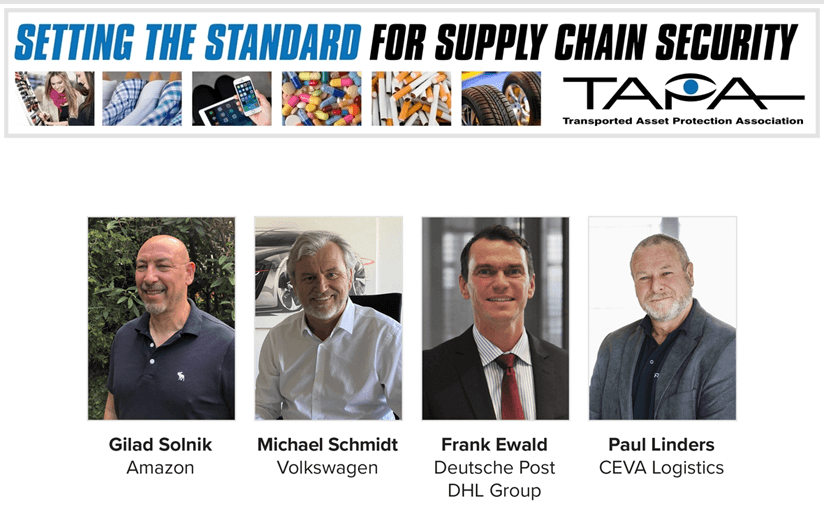 The Transported Asset Protection Association (TAPA) has established a new Advisory Board in its Europe, Middle East & Africa (EMEA) region to spearhead its transformation into an end-to-end supply chain resilience organisation under the leadership of President & CEO, Thorsten Neumann.

Thorsten Neumann said: “COVID-19 has placed more emphasis on supply chain resilience than ever before, and that’s why we are achieving record growth – but we plan to deliver much more. Our new structure retains the outstanding stewardship we have enjoyed from our Officers in recent years and now also injects the knowledge and expertise of highly experienced and respected Chief Security Officers representing some of the world’s biggest brands to inspire, sense-check and spearhead our growth strategy and digital transformation. The willingness of Gilad, Michael, Frank and Paul to join our new Advisory Board in EMEA reflects their personal commitments to achieving the very highest levels of supply chain security and resilience, and promises significant benefits for our members as we move forward. We are proud of have executives of their calibre helping to shape our future.”

TAPA was founded in 1997 to help Manufacturer and Logistics Service Providers minimise losses from their supply chains. In June 2019, the appointment of Thorsten Neumann as TAPA EMEA’s first full-time President & CEO, after his previous 13 years as Chairman, heralded the Association’s plans to shift from being managed solely by volunteers to a new professionally-led structure. It also signalled its intention to focus on all aspects of supply chain resilience to maximise the value of membership.

In the EMEA region, TAPA is now reporting all-time highs for the number of member companies, incident data and intelligence reports, and certifications for its Security Standards for facilities, trucking and secure parking.

Gilad Solnik
Following 11 years in Military and Government service in Israel, in 1992, Gilad became Founder & Managing Director of Pro-Tech-Team in Israel, an international security consulting and projects management organisation. In 1999, he joined DHL Express Israel as Head of its Security & Shared Services division before relocation to Belgium in 2001 to take the post of Regional Security Manager – Europe for DHL Worldwide Network, and later spent four years as CSO & Head of Corporate Security at ST-Ericsson in Switzerland. He joined Amazon.com in 2013 as Director Security & Loss Prevention, Global Security Operations.

Michael Schmidt
Michael started his career as a police officer before joining TNT Express in 1989 as a Security Manager, becoming a member of the senior management team and General Manager for Security & Data Protection for the Central and Eastern European regions. Between 1999 and 2006, he served as Senior Vice President Corporate Security at Deutsche Post World Net before joining RWE as Head of Group Security. He has held his current post as Chief Security Officer at Volkswagen since 2013.

Frank Ewald
Frank started his career as an Officer in the German military, serving in operational units as well as in the Learning and Development Center of the German Special Forces (KSK). Between 2004 and 2011, he held different functions in the field of Corporate Security at corporations including Deutsche Bank AG, John Deere and Daimler AG. For the last eight years, he has held the position of Head of Corporate Security & Crisis Management for Deutsche Post DHL Group.

Paul Linders
After serving in Dutch national law enforcement for over 17 years, he moved into the world of supply chain security in 1996 with CEVA Logistics and is now the company’s Global Head of Security. Paul also continues to serve TAPA globally as lead of the World Wide Change Control Board (WWCCB).