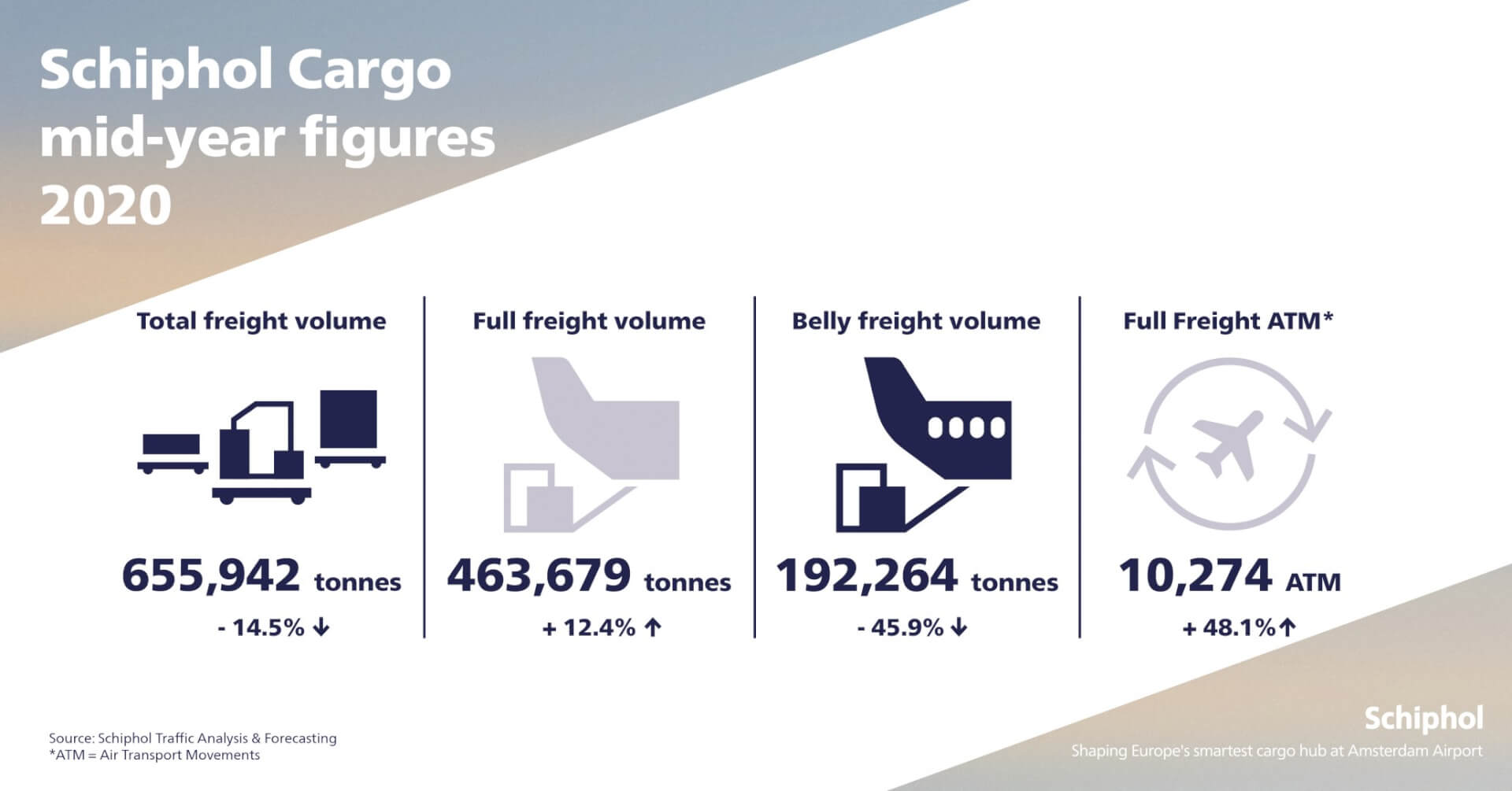 Amsterdam Airport Schiphol’s total cargo volume for the first half of 2020 declined by 14.5 per cent to 655,942 tonnes compared to 2019, as an increase in full freighter cargo did not make up for the decline in belly traffic.

Although total volume declined over the first six months of the year, Schiphol rose from fourth to third in the list of the busiest European cargo hubs during the period.

“Schiphol’s figures and operations were heavily impacted by the Covid-19 outbreak, and from early this year, the decline in passenger aircraft led to a decrease in belly volumes,” said Bart Pouwels, Head of Cargo, Amsterdam Airport Schiphol.

“ATMs are now showing signs of recovery which is positive.

“The extra belly capacity on intercontinental routes helps the air cargo market in Amsterdam to better serve its customers.”

Every cargo market saw declines in the first half of the year as all regions were heavily impacted by the Covid-19 pandemic.

Schiphol was affected by Covid-19 from early this year and it led to a steep decline in overall ATMs in the first six months of 2020.

At the lowest point in April, Schiphol was averaging about 144 ATMs per day every week, a 90 per cent decline in ATMs on 2019.

“The Covid-19 pandemic has also led to a shift in cargo flows and some usually high-volume verticals have decreased, such as the import and export of flowers,” said Pouwels.

Despite the challenges, Schiphol has played a crucial role in transporting critical cargo in the fight against the virus, such as personal protective equipment (PPE).

“The Schiphol air cargo community has worked closely together to ensure that essential cargo was moved through the supply chain,” said Pouwels.

The future is uncertain at Schiphol as markets around the globe are at different stages of the Covid-19 pandemic.

“We are seeing passenger flights increasing which means an increase in belly capacity, but it is important we move along with customer needs and make sure all demands are accommodated as well as possible,” said Maaike van der Windt, Director Aviation Marketing, Cargo and Customer Experience, Amsterdam Airport Schiphol.

“Sustainability remains an important focus for Schiphol, and as air traffic is picking up, it is important restarting regular flight traffic will be executed in a controlled manner, taking Schiphol’s surroundings into consideration.”

The health and safety of staff involved in cargo handling is also a focal point and Schiphol is cooperating closely with the cargo community to comply with government guidelines and ensure the correct implementation of protocols.

“We hope to continue to welcome increasing demand of our airlines and to see more routes and frequencies added to our network again,” said van der Windt.