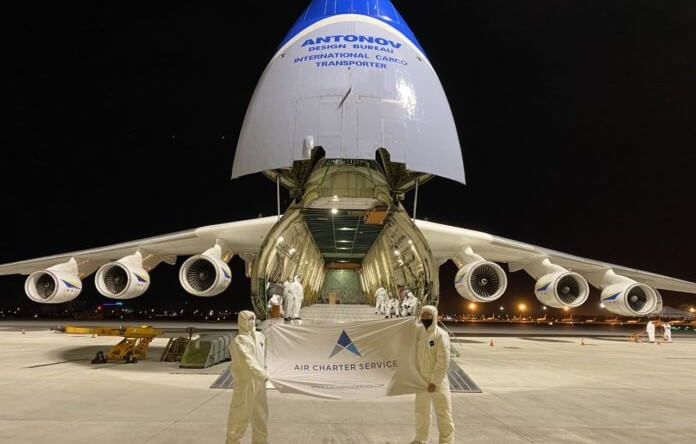 In the battle against Coronavirus Air Charter Service says that its offices in Beijing, Shanghai and Hong Kong, have proved invaluable in helping to arrange the hundreds of flights the company has booked to carry more than 20,000 tonnes of personal protective equipment around the world to over 60 different countries.

Justin Lancaster, ACS’s Group Commercial Director, commented: “We have been booking aircraft carrying protective equipment around the world since the first week of February, initially flying into China and other parts of Asia but, due the spread of the virus, we have now flown aid to all parts of the globe – more than 60 countries.

“Whilst the cargoes have been a variety of personal protective equipment, 20,000 tonnes would be equivalent to almost five billion face masks!”

“We’ve used all types of aircraft including the huge Antonov AN-225, AN-124s, Boeing B747s and Boeing B777s. Due to passenger aircraft not flying on their usual routes at the moment, we have been able to source carriers willing to fill them up with cargo packed securely onto the seats and in the belly hold space.

“Every one of our 27 offices has been involved in this incredible effort, and having our Asian offices in Beijing, Shanghai and Hong Kong, where almost all of the cargo is now originating, has ensured smooth operations at the airports and enabled us to be up to speed with the latest airport situations and requirements. Being able to deal with local agents, local shippers and local airports all in the local language and with local currency has meant our charters have run as smoothly as is possible through airports dealing with unprecedented pressure and demand.

“Much of our regular work disappeared overnight, but a re-footing of the business means that these charters are going someway to replacing some of the charters we would usually be doing, as well as some project charters that have had to be cancelled.

“Now is one of those times where our industry really can make a difference and we feel like we are truly playing our part in helping the world fight this pandemic.”