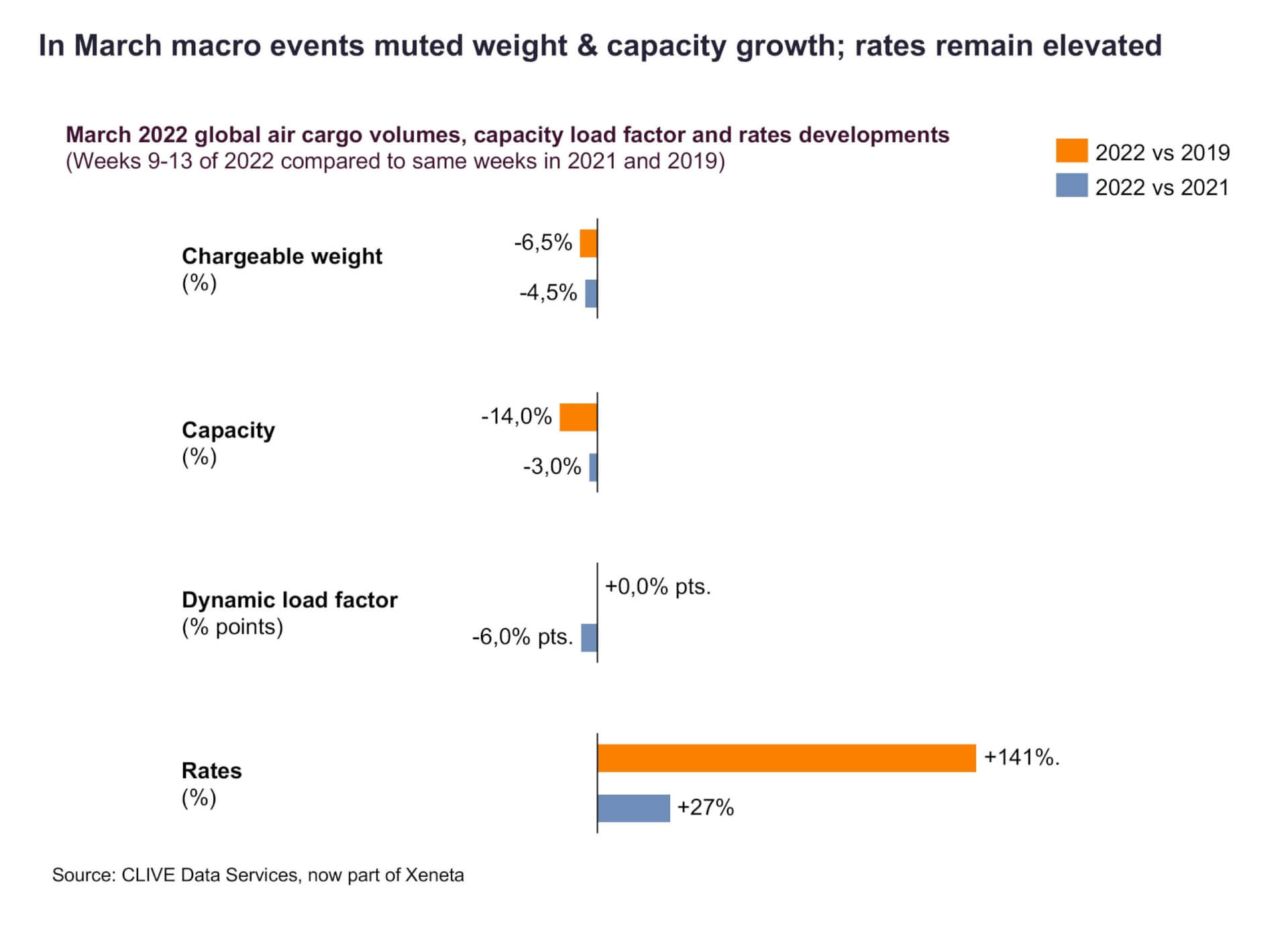 The war in Ukraine, resulting sanctions and lockdowns in China muted the growth of general air cargo volumes and capacity in March, causing a sudden interruption to the recovery trend of recent months after the peak Covid disruption of the past two years, according to the latest weekly air cargo market intelligence from CLIVE Data Services, part of Xeneta, the leading ocean and air freight rate benchmarking, market analytics platform and container shipping index.

Similarly, general air cargo capacity stood at -14% versus March 2019 and at -4% compared to the same month a year ago.

This was exacerbated by the closure of Russian airspace and the immediate cancellation of some airline capacity, which led to a quick 20% fall in Europe-NE Asia capacity.

CLIVE’s ‘dynamic load factor’ – which considers both the volume and weight perspectives of cargo flown and capacity available to produce a true indicator of airline performance – was largely unchanged month-over-month at 66%.

This was the same level seen in the same month of 2019, but 6% points lower than March 2021 after record load factor levels in the opening weeks of last year.

Overall airfreight rates remained at similar elevated levels to those seen in February, averaging +141% compared to March 2019 and +27% higher than March 2021.

CLIVE also identified a rise in the amount of airline cargo capacity being placed on the short-term spot rate market, with particular impact regionally. Spot rates and spot share continued to rise on the Europe to Japan trade lane, for example, with spot rates from Japan to Europe climbing in the last week of the month (March 21-27) to levels of around EUR 5.00 per kg, nearly 50% higher than in the weeks preceding the Ukraine war.

The spot share (= amount of chargeable weight being ‘sold’ at a spot rate) increased to nearly 60% or 20% points higher than the spot share in early February.

“In overall air cargo market terms, March was a step back from the trend we saw late last year and earlier this year. We have been reminded of how the limited control the general airfreight market has over its own destiny and how it is impacted by passenger traffic trends, disruption in the oceanfreight market, and geopolitical events,” said Niall van de Wouw, Chief Airfreight Officer at Xeneta.

At 83%, the North Atlantic dynamic load factor from Europe to North America in March was ‘just’ 5% points lower than in March 2021, when it reached record levels of close to 90%.

“It is ‘just’ because, since then, capacity on this trade lane has increased by around 40%.

“This marginal decrease in load factor, despite this increase in capacity, is mainly caused by the 25% increase of volumes from Europe to North America compared to the same weeks last year.

“Although it is too soon to tell what the skyrocketing inflation numbers in the US will result to, the logistical difficulties on the water between these two continents must put some wind into the sails of the air cargo market.

“With continuously declining schedule reliability of the ocean liners, logistical departments will likely be required to resort to airfreight because of disruptions to their supply chains caused by these record low service levels,” he added. 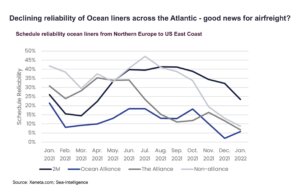 Discussing the challenges impacting the ocean market, Peter Sand, Chief Analyst at Xeneta, commented: “The average of 9.5 days of late arrivals is more time than is spent crossing the Atlantic itself.

“What this also means is that congestion will worsen in the coming weeks and months.

“The jump in spot rates in the oceanfreight market from North Europe into the US East Coast illustrates how desperate regular shippers are to get their cargoes in – as fast as possible – to avoid the squeeze in ports and terminals that comes out of more capacity being added and more cargo coming in.”

“There are also still many issues with capacity on the ground. One bottleneck got replaced with another one,” continued Niall van de Wouw.

“Load factors are lower this year than they were last year, but prices are higher. The latest disruption in Shanghai is not unexpected but it adds to the worldwide issue of staff absence because of high Covid cases.

“Right now, the airfreight and oceanfreight markets are in general a mess, with shippers and consumers having to pay the price. In the first two months of 2022, we were talking of growing resilience in the airfreight market and a recovery to pre-Covid levels. March data shows how quickly this can change.”