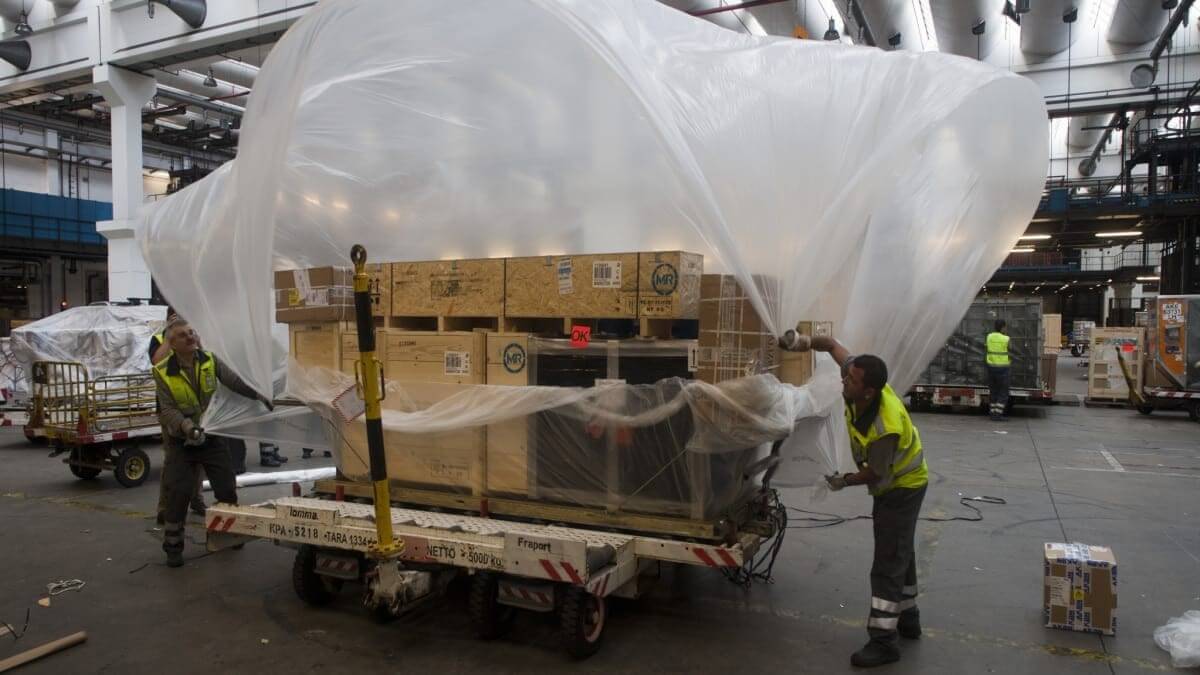 Each year, Lufthansa Cargo needs about 500 tons of plastic film worldwide to protect its freight during transport.

As part of its sustainability strategy, the company has been working for many years to reduce the need for plastic and to establish the most environmentally friendly handling possible at its approximately 300 stations around the globe.

Starting in mid-September, Lufthansa Cargo will be the first cargo airline to use a new type of film that consists of ten percent recycled plastic and is also one micrometer (one µ) thinner than previous films.

This means that about two kilograms less film is needed on each cargo flight.

“We are therefore particularly concerned to reduce our need for plastic and to use it in a way that conserves resources.

“In our sustainability strategy, we follow the guiding principle ‘Every Action Counts’. Every step we can take to make airfreight logistics more sustainable is important to us – in the air as well as on the ground.

“We are particularly pleased to be the first cargo airline to be able to use a more environmentally friendly film in the transport of our freight after many tests at selected stations and good cooperation with our specialist departments, our waste disposal company and our film producer.

“This brings us a step closer to our goal of using our plastic film in a circular way.”

Lufthansa Cargo is pursuing a comprehensively conceived plastics strategy based on the idea of using the recyclable material according to the closed-loop principle.

For example, Lufthansa Cargo is working together with its local waste disposal company and film manufacturer Verpa Folie Weidhausen GmbH in Germany to collect the approximately 400 tons of used film per year in Frankfurt that is no longer needed after a transport, to have it processed into granulate, and to have it incorporated into new film as a recycling component.

Numerous tests have taken place in the past, both in handling at Lufthansa Cargo and at the disposal company and film manufacturer, in order to come closer in small steps to the desired cycle, also called “closed loop” in sustainability management.

“The development of a sustainable plastic film is a long-term task on which we have worked intensively with Lufthansa Cargo,” explains Peter Griebel, Managing Director of Verpa Folie Weidhausen GmbH.

“Together, we have developed requirements for the new film, tested it in operation and can now introduce it as a standard product worldwide at Lufthansa Cargo.

“Now we have set ourselves the goal of successively increasing the recycled content of our plastic film to 30 percent by 2025.”

Lufthansa Cargo has also established multiple use of plastic film as a standard handling process since March 2022.

This step will also gradually contribute to reducing overall consumption.

The airline is also focusing on the collection and disposal of end-of-life materials: Worldwide, a review of how plastic film is collected and disposed of has been carried out in recent months and – where necessary – agreements have been adapted with local disposal companies to ensure that as much of the recyclable plastic material as possible is collected and disposed of properly – and does not end up in the environment.