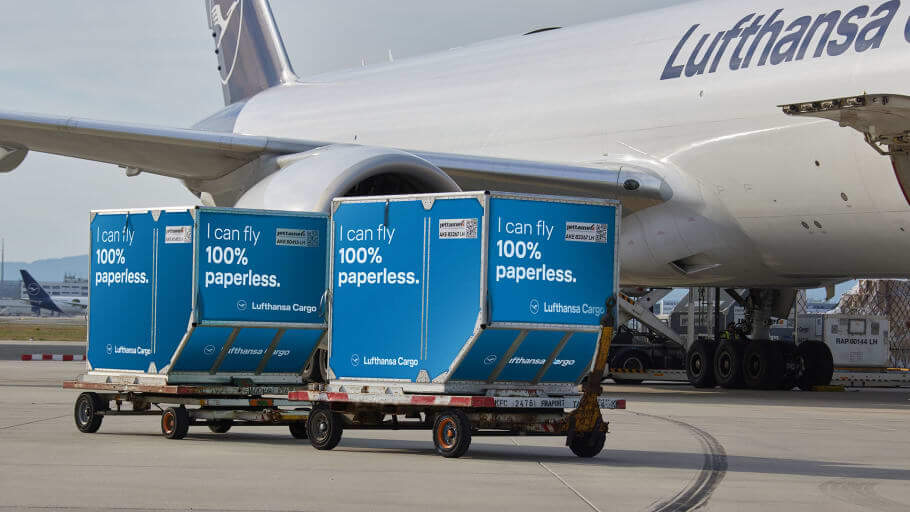 In 2020, IATA announced an industry goal to achieve 100% eAWB by the end of 2022, meaning that all shipments will be carried only with electronic air waybills (eAWB).

To meet this goal and continue to lead the way in digitizing the entire air cargo industry, Lufthansa Cargo is now taking a major step towards completely paperless shipments: starting with the summer schedule on March 27, 2022, all shipments on feasible lanes will be carried with electronic air waybill – eAWB only.

In addition, the airline is introducing a “paper-to-eAWB” service, through which the few remaining paper-based AWBs will be digitized at shipment acceptance and then continue to accompany the shipment as an eAWB.

“Over the past few years, we have driven many digitization initiatives in the air cargo industry. In fact, eliminating paper AWBs in the future could be one of the most important steps,” explains Ashwin Bhat, Chief Commercial Officer at Lufthansa Cargo.

“A majority of our customers already use eAWB exclusively.

“With the new service, we can now easily take all customers with us on our digitization journey and enable them to take the step towards paperless transports as well”.

“Our goal is to make communication with our customers easier, faster and better with the help of our digital services,” said Dr. Jan-Wilhelm Breithaupt, Vice President Global Fulfillment Management Lufthansa Cargo.

“We have implemented the eAWB process as an industry standard of IATA continuously and worldwide at Lufthansa Cargo since 2014.

“A five-year data quality initiative that effectively de-cluttered the data interface between customers and Lufthansa Cargo was, among other things, an important cornerstone that enabled sustainable eAWB penetration and consistent top positions in global rankings.

“We are very pleased to have achieved our goal of transporting paperless shipments and avoiding unnecessary printouts along the process chains together with our customers and partners.”

The newly introduced service is mandatory on feasible lanes for all forwarding companies that do not yet use electronic air waybills.

Routes that are eAWB-feasible are those for which the regulatory basis for the use of electronic air waybills is in place.

This means that all shippers who have not been able to use eAWB so far due to their own infrastructure can also switch to paperless transports.

If local regulations in a country require the presentation of a paper AWB, Lufthansa Cargo will re-produce the AWB and it will accompany the shipment on the flight.

This sustainability aspect also plays into the United Nations’ sustainability goals “Climate Action” and “Industry, Innovation and Infrastructure,” to which Lufthansa Cargo has committed itself along with other goals.