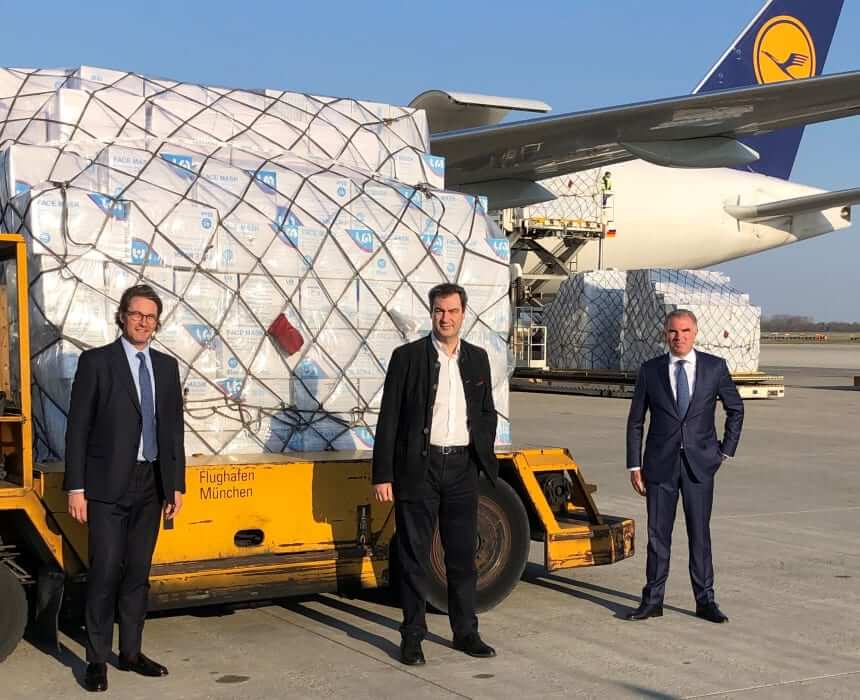 A Lufthansa Cargo aircraft carrying eight million protective masks on board landed in Munich, late Tuesday afternoon. The Boeing 777F, named “Olá Brazil”, departed Shanghai earlier this morning and after a brief stopover in the South Korean capital Seoul, the aircraft continued its flight to Munich, where it landed punctually at 5:50 pm.

The aircraft was welcomed personally by the Bavarian Minister-President Dr. Markus Söder, the German Federal Minister of Transport Andreas Scheuer and the Chairman of the Executive Board and CEO of Deutsche Lufthansa AG, Carsten Spohr.

The eight million masks were packed in 4,000 cartons, weighing 26 tons all together. The shipment was transported by Lufthansa Cargo on behalf of the Bavarian State Government in cooperation with the logistics company Fiege.

“The cooperation with Bavaria and partners such as Lufthansa for the rapid procurement of the protective equipment is excellent. All procedures are perfectly coordinated. Whether it is logistics, assignments, decisions, reliability – it all fits together,“ said Federal Transport Minister Andreas Scheuer.

“Especially now, cargo flights are of utmost importance for medical facilities but also for craftsmen and large corporations. We are doing everything we can to maintain supply chains during this crisis and ensure that people receive sufficient supplies. This is an important part of our corporate responsibility as a leading European aviation group,” said Carsten Spohr, Chairman of the Executive Board and CEO of Deutsche Lufthansa AG.

At present, all 17 Lufthansa Cargo freighters are continuously operating to transport urgently needed goods, such as medical supplies, around the world and to Germany. In addition to the regular cargo flights, this week there will be 25 special flights with Lufthansa passenger aircraft, which will be used solely as freighters. A further 60 cargo flights with passenger aircraft are planned for next week.