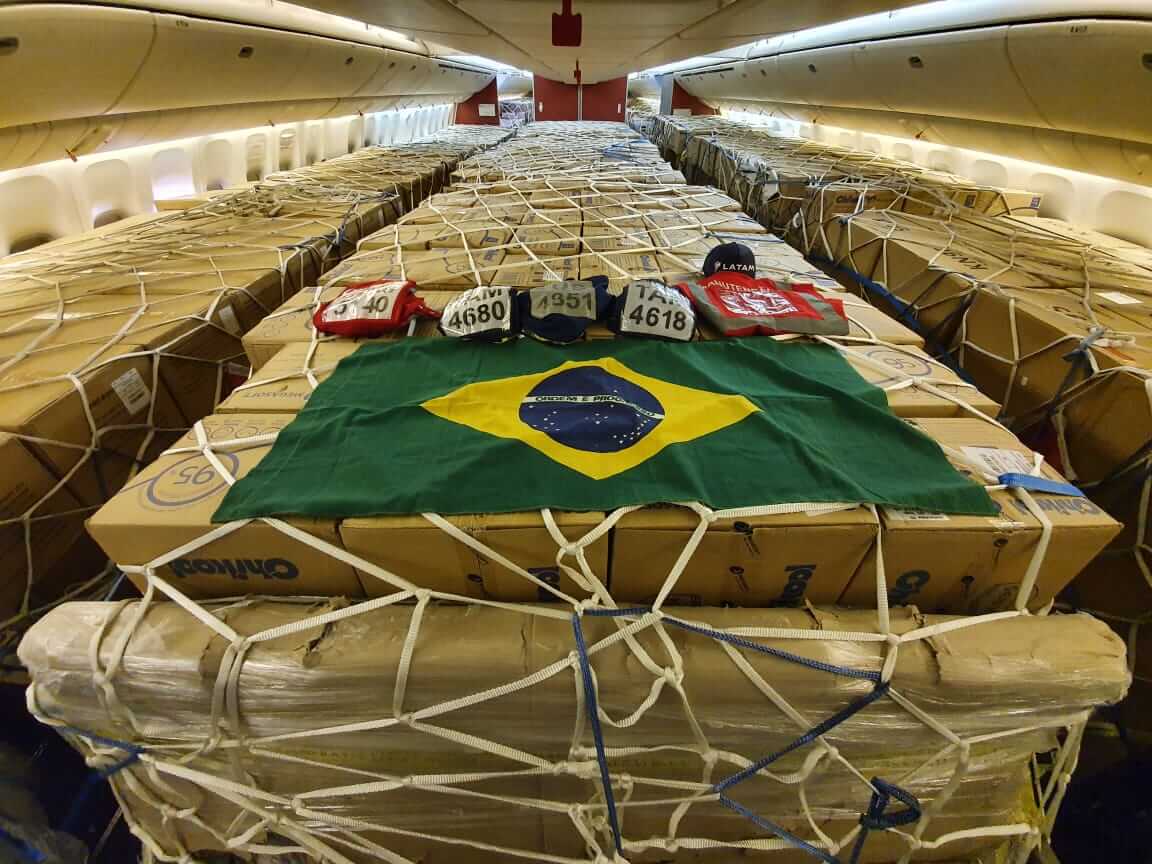 Flight number 39, the last of the unprecedented mega-operation between the Ministry of Infrastructure and LATAM, arrived in Brazil on Sunday night (19). The operation began in May and LATAM was responsible for transporting 240 million N95 surgical masks into Brazil. They were acquired by the Federal Government in order to try to combat COVID-19. These over one thousand tons of equipment have been distributed among health professionals in the 27 federal units.

Flight JJ 9553, coming from Guangzhou (China), arrived in São Paulo-Guarulhos International Airport at 9:46 p.m. carrying 3.7 million N95 masks. This was the last shipment containing cargo purchased by the Ministry of Health and delivered by the Ministry of Infrastructure. Boeing 777 passenger aircraft were used to transport these N95 masks, the most adequate for health professionals’ protection from the new coronavirus. Cargo was transported in the aircraft’s bellies and, in addition, the cabins were also adapted to carry 5.880 boxes.

In order to fight the COVID-19 pandemic, during March the Ministry of Infrastructure developed a logistics and distribution plan supported by the Ministry of Health and state and local governments. The national plan included actions to enable the arrival of these imported goods, conversations with airport government agencies to prioritize customs clearance, and measures to support equipment distribution among the states.

In April, after requesting quotes internationally and establishing the lowest price, the Ministry of Infrastructure closed an association deal with LATAM Airlines. In turn, the company developed special logistics and began operations to China for the first time in the group’s history. Aircraft and teams had to be prepared for this mega-operation, which crossed 11 different time zones. The first flight carrying masks arrived in Guarulhos on May 6.

More than 300 LATAM employees were responsible for this operation. Both in land and air, mechanics, pilots, copilots, operational dispatchers, cargo personnel, coordinators, planners and supervisors crossed the skies in order to contribute to supplying Brazil in the midst of the pandemic.

All 1.200 tons of goods were put into 146.661 boxes, enough to fill five Olympic swimming pools. The aircraft traveled around 1.9 million kilometers, five times the distance between the Earth and the Moon. Shanghai, Guangzhou, Xiamen (China), Amsterdam (The Netherlands), Auckland (New Zealand), Santiago (Chile) and São Paulo were some of the destinations used for stopovers and landings during these flights. About 2.550 flight hours were required: equivalent to 106 complete days in the air.

“Hundreds of professionals saw this unprecedented operation as a true mission for the country. Congratulations to LATAM and MInfra’s personnel, as they made it possible to successfully support the Ministry of Health over the last three months. The efforts made by the teams involved in this mega-operation contribute to supplying Brazil in order to fight the pandemic. These 240 million masks will benefit health professionals all over the country”, stated Tarcísio Gomes de Freitas, Infrastructure Minister.

The five Boeing 777-300ER aircraft that LATAM used during this mega-operation with the Federal Government were originally designed to transport passengers. However, their interiors were adapted to transport the masks. This form of operation allowed the company to not only use aircraft bellies, but also passenger cabins to place cargo on the seats, between the seats and in the hand luggage compartments.

“It is a pleasure to know that the focus placed on such a challenging and unprecedented operation during the last months resulted in a rapid and efficient delivery for Brazil. We implemented all our logistics expertise to combat this pandemic and reinvent our operation in a very short period of time. We are proud of the results because they display the excellent teamwork of over 300 employees, all focused on a higher purpose”, stated Diogo Elias, LATAM Cargo Brazil’s Director.

FINAL BALANCE OF MINFRA-LATAM LOGISTICS OPERATION IN SUPPORT OF HEALTH

• 1.9 million kilometers traveled, five times the distance between the Earth and the Moon