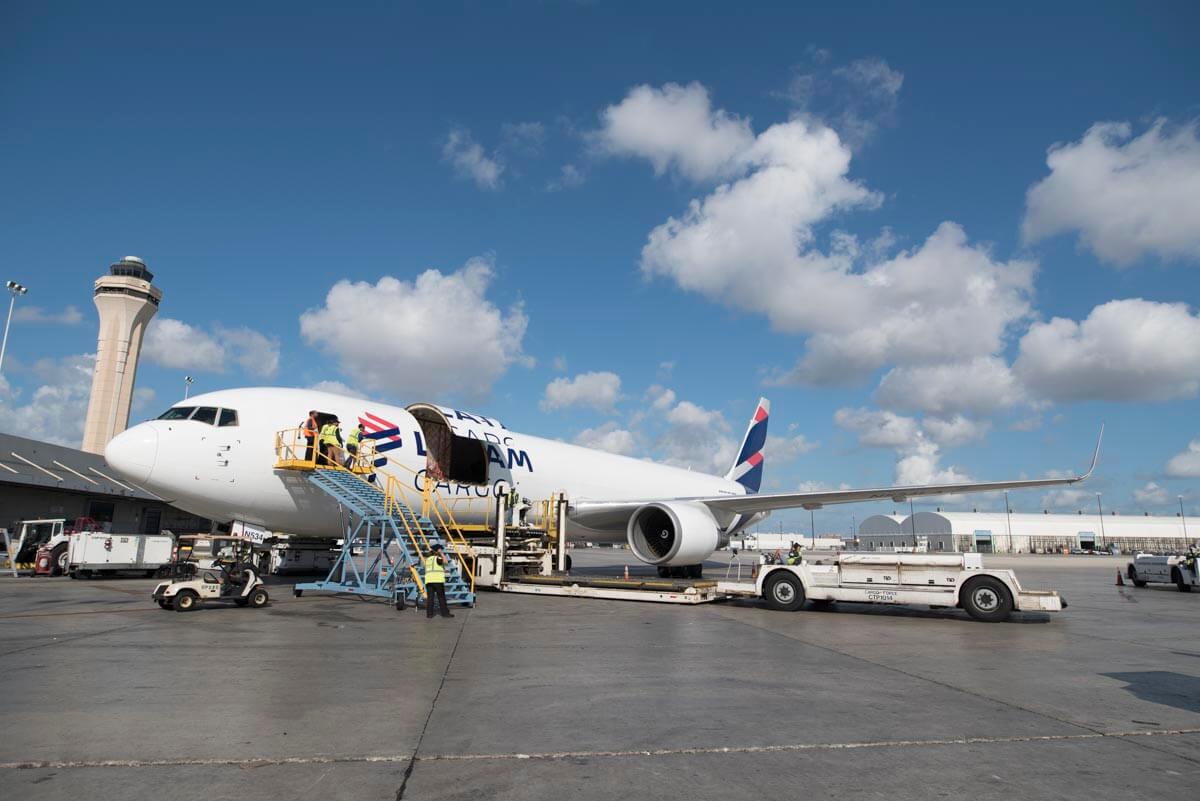 In order to face the negative effects that COVID-19 has brought upon the airline industry—including closed border policies and passenger flight restrictions—LATAM Cargo Group has made a series of modifications to its itinerary and operation to increase its transportation capacity and thus, mitigate the decrease in belly supply.

In line with this, the company implemented a direct cargo route from Europe to North America for the first time to offer new alternatives to its customers and serve more markets. Specifically, it connects Frankfurt (Germany) to Miami (USA) twice a week, expecting to transport pharmaceuticals, auto parts and electronic products, among others. At the same, this encourages the transportation of European products to new South American destinations in freighters via Miami. These include Lima (Peru), Bogota (Colombia) and Buenos Aires (Argentina).

On the other hand, in the Miami-Frankfurt flight, the company offers its clients greater capacity to export products from South America to Europe, mainly benefitting the transportation of perishable goods such as flowers.

After this implementation, LATAM Cargo went from seven to nine weekly frequencies offered between Europe and America, almost doubling capacity compared to the itinerary prior to the pandemic. The other seven frequencies to Europe follow the Quito (Ecuador) – Miami (USA) – Amsterdam (Netherlands) route. This way, Amsterdam is positioned as the main gateway to the European continent for the exporters of perishable goods in Latin America (Chile, Peru, Ecuador, Guatemala and Brazil).

The inbound trips for the seven frequencies begin in Frankfurt (Germany) and end in Latin America, positioning this city as the main exit door for medical supplies, electronics, auto parts and general cargo, among other types of goods intended to reach Latin America.

Other measures adopted by LATAM Cargo

During the last two months and in the context of the pandemic, LATAM Cargo Group has made a series of modifications to its itinerary and operation in order to mitigate the negative effects that belly capacity restrictions may have on customers.

One of the measures consisted of multiplying the cargo capacity between Santiago (Chile) and Miami (USA) by five, going from 6 to 31 weekly frequencies in order to offer salmon exporters—one of Chile’s main industries—a robust solution. The company also launched the Santiago (Chile) – Los Angeles (USA) route for cargo transportation. Los Angeles is a city with strategic location for salmon, serving as a connection center to reach the Asian continent. Moreover, the Mexico City (Mexico) – Lima (Peru) – Santiago (Chile) route was included, benefitting the transportation of technology products, spare parts and health-oriented items to South America. In addition, connectivity from Miami to South America was increased by 15%, going from 23 to 26 frequencies.

Regarding its operation, the company began to use passenger aircraft exclusively for cargo transportation on a regular basis. This occurs both in international and domestic routes using different aircraft, including B777, B787, B767, A320 and A321. In some cases, seat containers have been used in order to optimize cargo transportation capacity in passenger aircraft. Through this strategy, LATAM Cargo complements the capacity offered by its exclusive cargo fleet, consisting of 11 B767Fs.