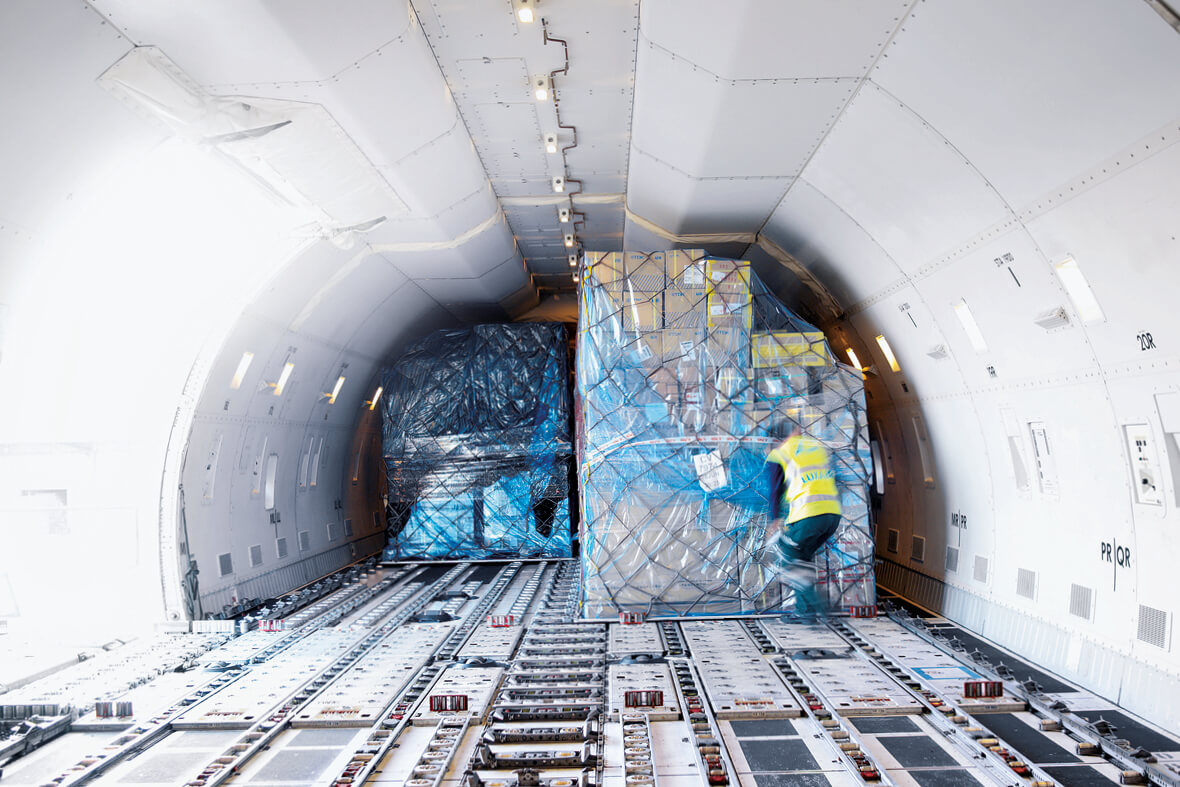 A regional supply chain bottleneck hitting one transport mode for a short time is part of the logistics planner’s playbook. But nobody predicted nor prepared for global air freight and sea freight being disrupted simultaneously, for months on end. And yet that is exactly what the world’s logistics experts are now facing daily, amid soaring demand, reduced freight capacity and escalating costs.

Frank Sumerler, SVP and global head of air logistics development at international freight forwarding giant Kuehne + Nagel, observes: “We have had crises before, but never before both sea freight and air freight at the same time. This is a convergence of both modes experiencing considerable constraints for a longer, sustained period.”
Access to air freight capacity is absolutely “paramount”, says Sumerler, but not just any capacity.
“I think that (access to capacity) is probably the number one dividing factor between larger and smaller logistics service providers; but I also want to underline the need for relevant and frequent capacity,” he highlights. “Sometimes we see a once-a-week controlled capacity flight, which is fine, but it also means that the cargo has a dwell time of five or six days to catch that flight. We prefer and strive for creating frequent capacity over just any capacity.”

Secondary airport changes
The Covid pandemic has further underlined the importance for freight forwarders like K+N to have efficient hub and spoke systems in place. This is because the megatrend of the last 18 months has seen demand grow at the bigger air cargo airports, while at many secondary airports it has diminished, as the pandemic hit passenger air travel and with it bellyhold cargo capacity.
Sumerler notes that a few select secondary hubs have coped well with increased demand during the pandemic, such as Frankfurt Hahn and Rickenbacker in Columbus, Ohio – but also freighter-focused hubs such as Liege in Belgium. He also highlights the example of Xian airport in China, which stepped in when major cargo airport Shanghai Pudong (PVG) was in lockdown due to Covid.
“The bulk of the business still revolves around the main airports, and a few others have taken the opportunity to push themselves forward; but I can’t really name too many,” he notes.

Coping with volatility
“Look at what happened in Shanghai, when all of a sudden Xian airport was handling cargo. I guess we need to get used to this kind of volatility because if a major hub like Shanghai shuts down, what do you do? The freight needed to flow, and we were pushing cargo from Shanghai all the way down south to Hong Kong, which is quite a distance. Having contingency plans in place and access to alternative solutions is our core competency.”
The convergence of sea and air cargo disruption has led to substantial freight cost increases and posed some difficult questions for shippers – such as when, or if, to shift from ocean to more expensive air. But those who decide quickest can reap benefits, whereas those that delay can see the extra costs escalate.
“When they realise that they do need air freight if they want to have product on the shelves, then they come to a point where air freight already is at a premium,” Sumerler highlights. “I think this is the main contradiction within an organisation; being a bit bold earlier on and saying ‘yes, it is going to cost me more, but I can maintain a steady supply chain’.

Better forecasting
While some cargo owners are better than others at forecasting their air freight capacity needs, one potential additional factor is that consumer demand patterns have changed and become less predictable due to e-commerce – especially during the pandemic – adding to the challenges.
“Consumer demand is very asymmetrical because of certain limitations – such as when government lockdown restrictions kick in suddenly and last for two months; and then there is a huge reopening and things start flying again,” Sumerler highlights. “This stop and go is a problem for forecasting.”
Despite being less predictable, air freight is expected to continue to see growing e-commerce demand – including for next-day delivery.
“Consumers have become very impatient,” Sumerler observes. “Everyone expects their order to be there next day. It used to be a week or 3 to 4 days, but now we order something online, click goodbye and expect it next day. The day after is already too late.”

Alternative supply chains
Another changing dynamic has been an increased focus on environmental considerations. Prior to the pandemic, some shippers were already looking at alternative supply chains – not only to increase supply chain resilience, but also to reduce their carbon emissions from aviation.
This trend is likely to accelerate when there are more predictable logistics in play, Sumerler believes, noting: “Some shippers had already started to move in that direction before the pandemic. The trend was focused on carbon emissions and environment, spending less energy in getting products to the market. Sea-air, which used to be big in the early 2000s and even in the late 90s, was seeing a great resurgence.
“We had a good pick up on our sea-air product before the pandemic, but since the pandemic it has actually made a lot of sense – because you had a couple of hubs that were less constrained and you are able to reach those hubs in a way that didn’t really create an issue on a sea freight perspective, such as Dubai. You are able to get uplift from capacity-rich airports that were far less constrained as opposed to starting off from China or northern Asia.”
Rail and sea-air options
He continues: “So, that really made sense and we are now seeing some customers have fully introduced rail or sea-air alternatives into their supply chain. But I would like to still see more of this multimodal thinking, with alternative uplift points taking place.”
Surprisingly, given current container ship waiting times outside US west coast box ports, K+N says that Los Angeles has proven an “interesting point of transfer” for sea-air solutions – for example, from China to Europe.
“Likewise, from northern Asia to central and southern America from Los Angeles, which has also been very effective. When the port is not congested it is an excellent alternative to reach central and South America as well as Europe.”

Accelerated digitalisation
One legacy from the pandemic will be the accelerated adoption of digitalisation in the air freight industry, which has lagged behind the passenger sector.
Sumerler says that many stakeholders in the air freight supply chain are now more actively engaged in going digital, noting: “We have been quite held back as an air cargo industry compared to the passenger (industry). It is because ours is a very fragmented and very paper-based industry; but in the last 18 months, digitalisation has accelerated in certain parts of the chain – and that is very welcome, because we needed it.
“Communications between the logistics providers and the airlines are becoming increasingly digital, as it should be. As an industry, we have increased communications with most of our customers. They have an increased need to know what is happening, and we find it very positive to engage, inform and to be like a trusted advisor to them. It has opened increasingly more dialogue between us and the customers.”

Remote-working adjustment
The pandemic caused a very quick loss of ‘manpower’ in freight forwarder offices around the world, so the industry needed to be more process-oriented with its own operations. Sumerler observes: “There was a lot of soul-searching or process optimisation in many organisations because suddenly you couldn’t bring your workforce into the office. They needed to work remotely, and they needed to work in some level of synchronised manner to be close to the productivity levels they had when they were back in the office, side-by-side.”
K+N was one step ahead, says Sumerler, because it had replaced its early 2000s transport management system around three years ago prior to the pandemic’s arrival; and with it, the forwarder was able to finish its process optimisation.
“To a large extent we were ready to work remotely even a year prior to the pandemic,” Sumerler says.
Although digitalisation in the air cargo sector has risen rapidly due to the pandemic, Sumerler cautions that it is still very much a work in progress. “The train has left the station but there is still some way to go,” he notes.

Bellyhold cargo challenge
Among the many obvious changes forced on the air freight sector by the pandemic has been the loss of much of the bellyhold cargo capacity in passenger aircraft, which accounts in normal times for at least 50% of global uplift. One of the results of this has been a recent surge in freight forwarders expanding their existing capacity-controlled freighter networks or launching them from scratch.
But rather than being just a temporary response, Sumerler believes it will continue in the post-pandemic world, noting: “It is a long-term trend because it is really about relevant and frequent capacity. It is about having the capacity in the right place with the right amount. Passenger aircraft are nice, but we have seen just how fragile bellyhold capacity is; and the airlines are still in such dire straits.”
He continues: “We just cannot rely on belly capacity to be a mid-to long-term strategy because the minute it doesn’t make sense financially for the airlines, they will pull it back. So that is why, for predictable mid-to long-term supply chains, we need capacity that we can count on – and, ideally, freighter capacity on the major trading trunk lanes.”
Preighters – passenger aircraft flown in freight-only mode, including those with reconfigured upper decks for low weight packages – were deployed in large numbers at the start of the pandemic, primarily to manage the surge in demand for personal protective equipment (PPE). While many have continued to operate, they are clearly not a stable, long-term solution.
“Preighters were great because they provided instant capacity; but there is a caveat: the minute a preighter flight cannot sustain itself, then it just does not make commercial sense,” Sumerler highlights. “The airlines are not just going to keep an aircraft running just for the sake of it.”

Near-shoring trend
Alongside these capacity considerations, there has been fresh talk of an increasing trend towards near-shoring of production by shippers in a post-pandemic future in order to add resilience to supply chains – with the pandemic adding further urgency to the discussions that started a year or two before Covid hit, when US president Donald Trump launched his trade war with China. But Sumerler is less convinced that it is really feasible to switch major production from China.
“This trend started a few years ago and I think it will continue; but it was a terrible time to try near-shoring – in the middle of the pandemic,” he highlights. “Companies will try to nearshore where and when they can, but it is not so easy when you see just how great the manufacturing capacity of China is. Plus, all the infrastructure in China has proven to be fairly capable.”