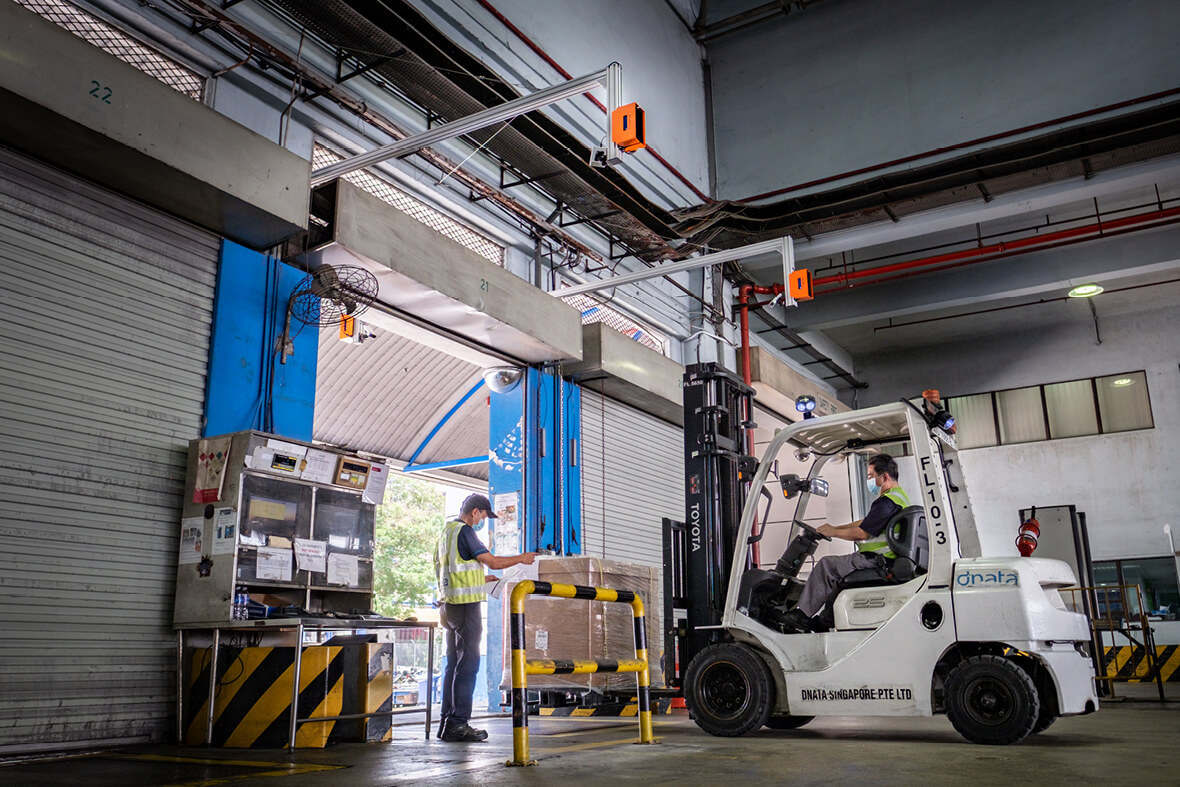 With digital cargo data becoming increasingly available from multiple sources, handlers and their customers are beginning to see the benefits of greater visibility and the ability to analyse and improve the efficiency of their operations, reports Ian Putzger

Visibility of air freight containers and pallets has taken a huge step forward with the deployment of Bluetooth readers and tags, and this process is now well underway among the major multinational cargo handlers. Dnata has completed the worldwide roll-out of Unilode and Descartes technology in its facilities; Swissport’s drive was delayed by COVID but is now approaching completion; and Worldwide Flight Services (WFS) started its network-wide deployment last December.

And some of the benefits have been immediate – and go well beyond the ability of carriers and handlers to keep track of the ULDs themselves. “From the moment we had them installed, forwarders were able to collect shipment data on these readers as well,” reports Hendrik Leyssens, Swissport’s vice president for global cargo operations.

“Previously our facility was a bit of a black hole for them. Now they can collect data, for example temperature data for pharmaceutical goods.”

The technology is quickly taking root. It serves as a platform for Dnata, airlines and forwarders to access information that previously required communication between their respective IT systems, remarks Terence Yong, cargo development director for Asia Pacific at Dnata.

Enhanced visibility
“It’s becoming one of the expectations of carriers,” he highlights. “Basically, it enhances what we can offer in terms of visibility.”

In Australia, where the imbalance of imports and exports has led to ULDs piling up as airlines cannot rotate them fast enough, the enhanced visibility helps Dnata work with carriers and forwarders to pinpoint where the boxes are and how long they have been there.And the flow of data between handlers, airlines and forwarders is improving.

“Airlines and forwarders are getting to the point of shedding the paranoia about sharing the air waybill data on a platform,” says Rory Fidler, vice-president for cargo technology at Menzies Aviation.
Still, he finds the progress so far rather slow. “In digital data flows, I don’t think a huge step forward has happened, but I think where we will start to get quick acceleration is in airport cargo community systems,” he explains.

Most up-and-coming cargo community systems (CCSs) are concentrating first on truck management before adding other functions, but some handlers are also going it alone on that front. Last November, Dnata introduced a cloud-based truck appointment and dock management platform at its Dubai base, which seamlessly integrates into the handler’s Calogi system. The platform considers multiple parameters, such as shipment characteristics and vehicle types, to identify the optimal slot. It also leverages data on historical behaviour.

More developments to follow
While the flow of data from the newly installed sensors in Swissport’s warehouses to handlers has exceeded expectations, for Leyssens there are more developments to follow. “The next step is to really integrate all that data. Today it’s more in a stand-alone solution,” he remarks. “This is one of the elements that fit into a bigger scheme of data integration.”

In early September, Swissport began the introduction of a new mobile application developed by CHAMP Cargosystems that allows the handler to record every step of the warehousing process. In conjunction with real-time visibility, this will allow customers to keep track of their shipment status according to Cargo iQ standards.
According to Leyssens, this opens the door for new tools that Swissport will deploy down the road. Moreover, it is driving in the same direction as the integration of new sensor technology, giving customers and warehouse staff more data at their disposal, he said.

“A lot of value, for ourselves and our customers, sits in this data. When we start connecting all these building blocks, that is incredibly powerful,” he reflects.
This drive aims towards the establishment of a new IT platform. “When we start connecting these building blocks, the idea is to build this ‘brain’ in the middle. There are so many possibilities we would have – looking at dynamic storage, looking at yield management, volume optimisation or workload distribution,” Leyssens adds.
Pektas also emphasises the need of a core system to integrate the different technologies his company has invested in. It is currently in the process of installing the iCargo system, which was chosen in part because MIC could drive more analytics off it. Until the platform is in place, MIC won’t be able to fully pursue its plans with AI, he says.

Unified platform critical
Menzies’ Rory Fidler also regards the establishment of a unified platform as critical, with data channels that can manage electronic messages and standardise them.
“It’s about unification, it’s about messaging and data, it’s about ensuring it’s efficient and you can automate redundant tasks,” he says.
Swissport will look into the platform scenario in the next 18 months, Leyssens says.

Before Menzies goes for a core system it will first implement a control tower that is driven by business intelligence at messaging level.
“You can’t control anything until you measure it, so introduce a concept of a business intelligence analytics-driven control centre that allows you to see and monitor your global operation,” Fidler says, adding that this should go towards being able to manage the operation by exception rather than by every shipment.
One challenge he sees on the way to a central platform is the absence of commercial solutions that accommodate the sometimes-vast difference in size of operations, which has significant ramifications in terms of the requirements.
“One size doesn’t fit all. Small stations don’t need the complexity of a big hub,” he explains. “What needs to change is a solution that fits the size of the warehouse and the throughput, an ABC-type set-up.”
The cost involved is another factor. Investments like those made by Amazon or DHL are not viable in an environment where most tenders come up every three years. “It’s a unique commercial position which completely strangles investment,” he said.

Pandemic’s acceleration effect
In the meantime, handlers continue the quest to digitise processes, a vital element to enable the advanced data capabilities that they aim to develop in the future. The pandemic has accelerated this drive, owing to the desire to minimise human touch points, Dnata’s Terence Yong notes.

Dnata is digitalising the acceptance process and is now leveraging automation in this process to measure outbound cargo. In Singapore, it has been using new technology called ‘Cargo Eye’ that combines 3D cameras with proprietary algorithms to accurately capture shapes and dimensions of cargo. This is backed by ‘Cargo Mind’ for the planning process, which helps maximise what can be loaded on a flight by ensuring better distribution of cargo across various ULDs, in line with all safety parameters and airline rules.

The Dubai-headquartered handler is planning to implement this similar automation in other locations. “That’s being looked at in Sydney,” says Yong. The handler is about to expand its footprint there.
Menzies’ Fidler is also impressed with the Cargo Eye technology. “I’d like to have the dimension piece and some sort of proof of concept in place in our Heathrow facility by the end of Q1 next year,” he says. He intends to use Menzies’ terminal at the London airport to develop some level of innovation and pilot concepts to be rolled out elsewhere later on.

Data analytics advances
With data analytics capabilities on the advance, Fidler views pallet building and space utilisation as the first areas where these will make their mark in air freight handling. He sees potential gains in the region of 10% from the use of these tools.

Dnata has already been leveraging data analytics and insights for forecasting and advance planning. Among other things, managing an on-demand workforce depends on data from the system, notes Yong.
Swissport is also using AI for its weekly and monthly forecasts. This uses some external macroeconomic data sets in combination with historical data. “The next bridge to cross is to elevate this technology to a more granular level,” says Leyssens. For instance, this could indicate how many trucks are expected at which point in time and what loads they carry, allowing the handler to prepare accordingly.
All of this is based on digitalisation and adequate data quality.

“This is the prerequisite that automation works,” says Yong. “Without proper and rich data, there’s really no AI.”
Overall, he has no complaints there. Most airlines are now Cargo iQ-compliant, which guarantees a minimum quality standard there, he notes, so Dnata can use their information without problems. “Internally we may need to do a bit of mapping to make sure the data flow is accurate,” he adds.

Some logistics warehousing operations have already leveraged augmented reality, equipping their employees with smart eyewear, but in air cargo warehouses this has yet to make a major impact. Apart from some training purposes, Swissport is not looking very closely at augmented reality at this point.
“You need a strong and intelligent warehouse management system behind that. It comes down to having this ‘brain’ in the centre before you use augmented reality,” observes Leyssens.
Pilots of wearables

In terms of using wearables, Swissport has used smart watches for a few pilot projects, mostly on the ramp, such as feeding information on a flight to crew members.
This autumn the handler is running a pilot project in its cargo terminal in Frankfurt. It is testing an automated guided vehicle developed by Lodige Industries, a supplier of air cargo terminal equipment. With a load capacity of up to 6,800 kilos, this autonomous vehicle can transport a variety of ULDs. This eliminates the need for fixed routes in the warehouse.
“It’s a nice addition to our standard infrastructure blueprint,” says Leyssens. “It helps us be more flexible. There’s no need to install fixed equipment, so we can adjust a lot quicker.”
Use of robotics

Although elements of robotics are increasingly being used in logistics warehousing, particularly among e-commerce fulfilment processes, its use in air cargo handling has mostly remained limited to the odd pilot study or express operator handling regular-sized, smaller shipments. But Hactl has been looking again at where it might be meaningfully deployed and has devised a new automated parts store for its handling systems which features a robotically operated dispensing system for urgently needed spares that can be accessed around the clock.
This robot, which can lift up to 40 kilos, manages over 200 multi-compartment bins that hold the most commonly used parts. Technicians can simply scan the code for the required parts and the quantity needed, whereupon the robot takes the shortest route to retrieve the parts and deliver them.
And Dnata is looking at the use of a robotic arm to help with the container build-up. This unit can pinpoint the exact cargo where it is staged in a project that is currently in the proof-of-concept phase, says Yong.

Sustainability theme
While much of the talk around technology is about efficiencies and new possibilities, the theme of sustainability is also now coming up more frequently and more strongly. Leyssens sees the strongest potential there in the digitisation.

“We can make quite a few isolated efforts,” he says, pointing to the fact that Swissport’s facility in Frankfurt is solar-powered, and to the company’s commitment to replace half of its ramp fleet with electric vehicles by 2025. “But in the end, I feel data and technology will open doors to do more on a larger scale. That will have a bigger impact than certain isolated events. We really need to look at the entire lifespan of a shipment.”