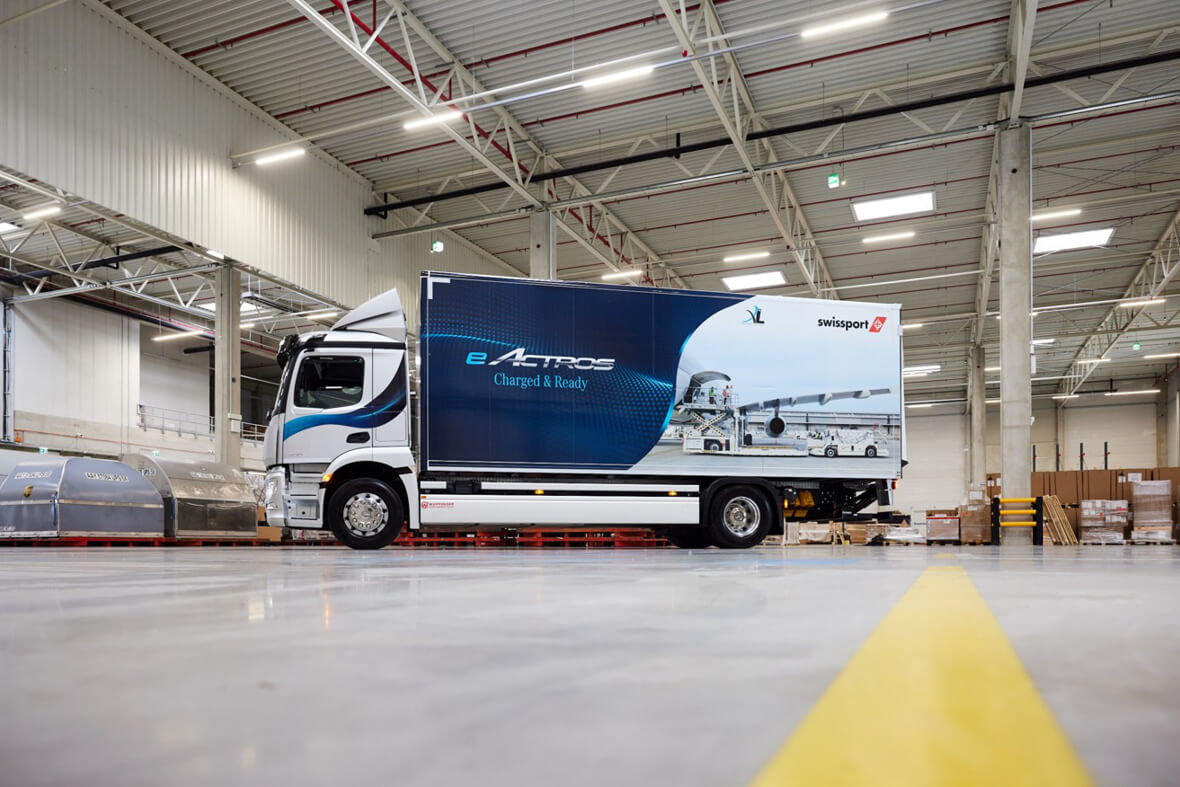 New 8,000 sqm centre more than doubles the group’s cargo handling capacity at VIE, while a new second-line terminal at AMS aims to relieve the handler’s on-airport warehouses, reports Will Waters

Swissport has opened a major new air cargo handling facility at Vienna Airport (VIE) to provide “additional capacity and flexibility” – with a particular focus on forwarder handling – alongside also expanding its second-line cargo handling capacity at Amsterdam Schiphol Airport (AMS).
The new 8,000 sqm cargo centre at VIE is located in the DLH SkyLog Park just a few hundred metres from the airport’s airside cargo terminals, more than doubling Swissport’s cargo handling capacity at the airport. It is connected with Swissport’s on-airport cargo centre by a dedicated electric truck, the first of its kind in Swissport’s global network. It is Swissport’s second major recent investment in Vienna, following the opening of a warehouse with direct tarmac access in mid-2019.

Forwarder handling opportunity
Swissport has been doing forwarder handling at VIE for some time at a smaller off-airport facility, but is looking to expand this part of its business – as the role of freight forwarders has evolved, with forwarders increasingly chartering their own-controlled capacity, and in some cases seeking airside facilities.
The company said it was continuing “to aggressively grow its air cargo business to participate in strong global demand for air cargo logistics and to capture additional market share. With a second cargo centre now operational in Vienna, Swissport can resolve local constraints and provide air carriers and forwarders in Vienna with additional capacity and more flexibility”.
Dirk Goovaerts, Swissport’s global cargo chair, commented: “We have invested in this state-of-the-art 8,000 sqm air cargo centre to support our growth ambitions in forwarder handling, and of course to serve existing and new airline customers with an even better product. We are very excited to more than double our capacity in Vienna and now have the infrastructure in place to support our vertical integration plans.”

Superior environmental performance
Swissport stressed that the state-of-the-art building “is set up for a superior environmental performance, featuring a 900,000-kWh photovoltaic system”. High-performance charging on-site “ensures that the Swissport e-truck can shuttle between the two locations without restrictions”. The company said it was “working to make air cargo processes more sustainable and efficient to continue to improve its services while reducing specific CO2 emissions”.
Henning Dieter, head of Swissport Cargo Services for Germany and Austria, commented: “We are pioneering e-mobility in air cargo handling here in Vienna together with Mercedes, Siemens, XL Forwarding & Transports and the Austrian Federal Ministry of Climate Action.”
In 2021, Swissport handled around 70,000 tonnes of air cargo at VIE. Within Austria, Swissport also operates a 3,500 sqm airside air cargo centre in a joint venture with Graz Airport.

Expansion at AMS
Meanwhile, Swissport’s new facility at AMS, located a 10-minute drive from its two existing terminals, significantly expands Swissport’s cargo handling capacity at AMS to 35,000 sqm. Swissport said that with cargo volumes on the rise globally and at Schiphol Airport, “introducing more warehousing space is key” and “prepares its operations at Schiphol Airport for the future”.
Jeroen Giling, director of Swissport’s cargo division at Schiphol Airport, said adding a third cargo terminal at Schiphol Airport “will relieve our first line on-airport warehouses, allowing us to use our total available space even more efficiently. It enables us to move not only more cargo, but also faster, reducing the waiting time for trucks considerably. With the opening, we are all set for the future growth of our existing client portfolio and ready to welcome new customers.”
With demand for global air cargo logistics “already above pre-pandemic levels and persisting global capacity constraints in air and sea logistics”, Swissport said it “expects growth in air cargo handling to outperform general airport ground handling for some time. The company has made cargo a strategic priority and set ambitious goals to grow its second largest business line from 5.1 million tonnes in 2021 to over 6 million tonnes over the next couple of years.” The 5.1 million tonnes handled last year compares with 4.6 million tonnes in 2019.