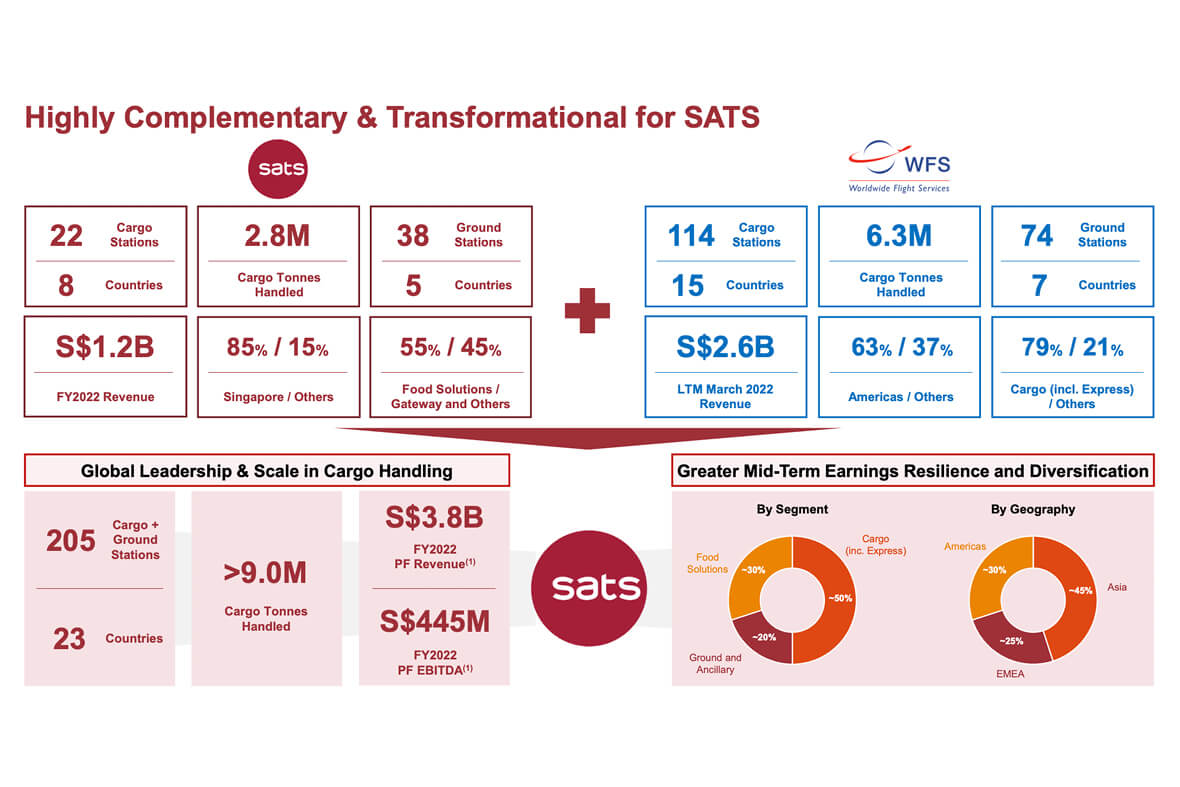 Singapore-based aviation services group SATS has finalised the funding plan for its proposed acquisition of Worldwide Flight Services (WFS) and revealed further details about the rationale and planned synergies from combining the two companies’ airport services activities to create the world’s largest air cargo handler.
SATS revealed on 1 December that the total acquisition cost of S$1.8 billion (US$1.33 billion) would be funded through a S$700 million loan from SATS’ principal bankers, a rights issue of up to approximately S$800 million, plus S$320 million from SATS’ existing cash balance.
The agreement, announced in September, for SATS to acquire WFS from US private equity firm Cerberus Capital Management for a cash consideration of US$1.33 billion values WFS at US$2.37 billion and is expected to close by 31 March 2023, subject to regulatory and SATS shareholders’ approval. WFS will become a wholly owned subsidiary of SATS after the proposed acquisition and will continue to be led by WFS chief executive Craig Smyth, alongside other key members of the senior WFS management team.
SATS said bringing together WFS, one the world’s largest air cargo handlers, with leadership positions in the Americas and Europe, and SATS, a leading provider of aviation services in Asia, will capture annual EBITDA synergies in excess of SG$100 million (US$74 million), through initiatives including cross-selling, network expansion and deeper e-commerce cargo partnerships.
Specific potential gains include “opportunities to identify gaps in customer coverage across the combined business, driven by a new cross-selling sales team and other initiatives”. Meanwhile, a global network of 205 cargo and ground stations in 23 countries “positions SATS for continued growth in existing and new markets”.

Accelerated cargo automation
Other opportunities include “accelerated cargo automation”, because “a larger combined capital base enables increased investment in productivity improvement and automation initiatives”. Synergies via “global e-commerce cargo partnerships” involve a plan to “leverage WFS’s leading e-commerce (and) express cargo handling proposition in Asia”.
And SATS also mentioned a plan to “establish and scale a downstream logistics business across geographies”, to “reinforce downstream cargo logistics”.
The two companies said the combination “creates a first-of-its-kind global air cargo platform with scale and a network of stations across Asia, the Americas, and Europe. Customers will benefit from the combined platform’s broader suite of services, operational best practices, and integrated technology.”
Kerry Mok, president and CEO of SATS, said: “Our customers are telling us that they want seamless support across regions, in a way that simplifies and strengthens their own operations. Combining with WFS will let us meet those needs through new cargo handling solutions and capabilities, enhanced service quality, greater digitalisation, and better visibility and traceability across the whole supply chain. It is a hugely powerful combination for growth, as well as delivering greater business resilience.

Creating a ‘global leader’
“This is a transformational opportunity for SATS and our proposed acquisition of WFS will create a global leader that can become the go-to provider of mission-critical aviation services.”
The company said the acquisition “will enable SATS to better serve air cargo customers in strategic hubs in Asia, Europe and the US, as well as in complementary new growth markets including Latin America and Africa. The combined network covers trade routes responsible for more than 50% of global air cargo volume.”
It highlighted that WFS operates in five of the top 10 cargo airports in North America and EMEA, including Los Angeles, Chicago, Miami, Frankfurt and Paris, noting that SATS is already present in four of the top 10 cargo airports in Asia, including Hong Kong, Taipei, Singapore and Beijing.
“Led by SATS, the combined group will have a greater ability to capitalise on growth across the cargo supply chain, and benefit from stronger demand for e-commerce and specialised cargo handling for items such as pharmaceuticals and perishables,” SATS said. “It will also add scale to SATS’ sustainability and ESG efforts, including decarbonisation and societal outreach as part of its purpose to feed and connect communities.”
Mok said SATS will gain increased resilience against future economic cycles and disruptions, with greater earnings robustness supported by a global and diversified customer base, adding: “As global competition increases, it is vital for us to tap into higher-value business segments and benefit from long-term cargo industry growth trends, even while we work to maintain our leadership position in SATS’ home base in Singapore. The global platform will enable us to service our clients seamlessly across Asia, Europe and the Americas and increase existing offerings. Our balanced funding plan to optimise financing costs and gearing will position SATS for continued sustainable growth.”
Founded in 1984, WFS has 32,300 employees at 164 major airports in 18 countries on five continents and generated revenue of €1.72 billion for the 12 months ended 31 March 2022.
SATS was established in 1972 as a subsidiary of Singapore Airlines, changing its name from Singapore Airport Terminal Services to SATS in 2010. It remains the largest air cargo handler and airport services provider at Singapore’s Changi Airport and is a leading provider of gateway services and food solutions in Asia, with customers in over 60 locations and 14 countries across the Asia Pacific, UK, and the Middle East.

Air cargo handling consolidation
The move to combine WFS and SATS follows hot on the heels of another major international air cargo handling consolidation deal. In August, Agility finalised its £763 million (US$925 million) acquisition of Menzies Aviation’s holding company John Menzies PLC, allowing it to combine the acquired business with its National Aviation Services (NAS) business to create a leading global player in air cargo handling and aviation services.
Operating as Menzies Aviation, the combined company provides air cargo services, fuel services and ground services at airports on six continents. Once integrated, the company will have approximately 35,000 employees and operations at 254 airports in 58 countries, handling 2 million tonnes of air cargo per year. Combined revenues of Menzies and NAS exceeded US$1.5 billion in 2021.