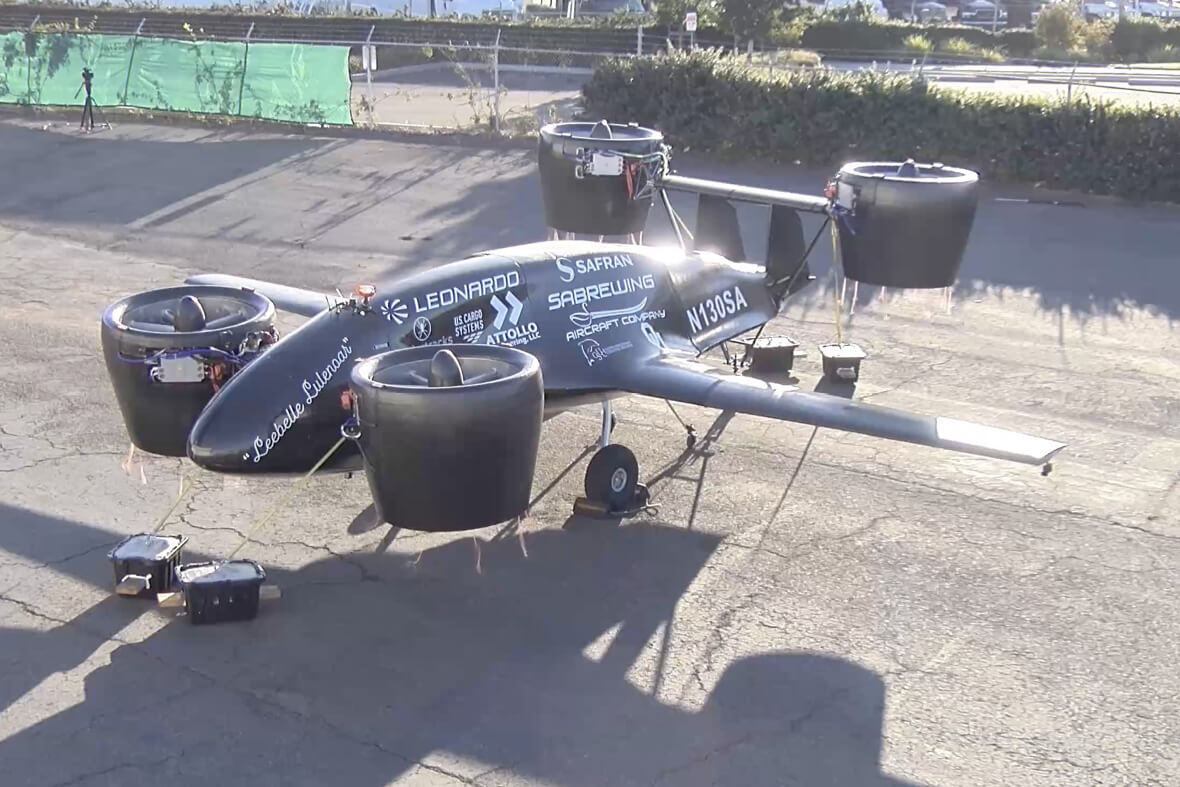 US cargo drone developer Sabrewing Aircraft Company has completed the first hover flight of its RH-1-A ‘Rhaegal’ vertical takeoff and landing (VTOL) air cargo drone, while lifting a record-setting payload.
This pre-production air vehicle, also known as the RG-1-A ‘Alpha’ model, was able to lift a record-breaking 374 kg payload, “shattering the previous world record for the ‘dead-lift’ of any commercial, vertical takeoff, uncrewed air vehicle (UAV)”, Sabrewing reported. It describes that the Rhaegal Alpha aircraft as “the world’s first autonomous cargo aircraft capable of both vertical and conventional take-off, designed to take tons of cargo to any location, in almost any weather”.
Ed De Reyes, chairman and CEO of Sabrewing, said: “This is only a fraction of what this aircraft can carry. But it proves that we’re able to lift more cargo on our maiden flight than any previous cargo UAV that has ever flown.”
The pre-production prototype aircraft weighed just over 1,225 kg for the first flight and is capable of a maximum gross weight, with payload, of up to 1,400 kg, at altitudes up to 6,700 meters and travelling at 200 knots. When taking off conventionally, this aircraft has enough thrust to carry over 2 tonnes of cargo with the same range, altitude, speed, and efficiency, Sabrewing said.

‘Bravo’ production aircraft
The next planned version of the Rhaegal, the RG-1-B ‘Bravo’ production aircraft, is designed for first-, middle- and last-mile cargo deliveries. Sabrewing said it “can lift over 10 times more cargo than its closest competitor, fly 5 times farther, and operate in any airspace – from the most congested city to the most remote location”. It is understood that the production aircraft will be capable of transporting a cargo payload of around 2,450 kg a distance of up to 1,850 km.
Sabrewing currently has purchase orders for 28 of the aircraft – destined for the World Food/World Health programme – and another 102 firm orders, and letters of intent for over 400 aircraft; these orders represent a $3.2 billion order book over the next 6-7 years. The first 28 aircraft are due to begin deliveries to the first customer by December 2023.