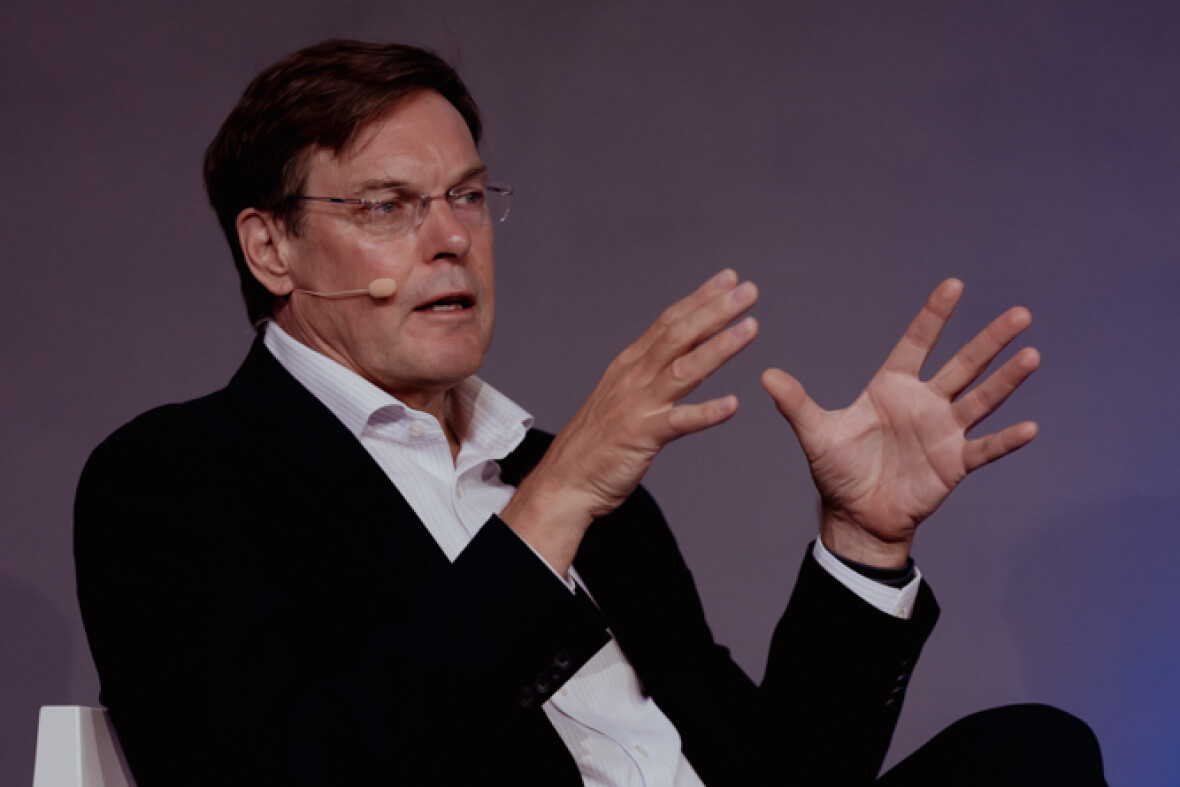 After a year in post, Swissport chief executive Warwick Brady outlines the progress made in restructuring this airport ground services giant and the challenges ahead. Mark Pilling and Olivia Pilling report from Paris

“Aviation is an industry that is still a very long way from being outsourced, so at the macro level there is plenty of long-term growth,” says Warwick Brady, president and chief executive of Swissport, speaking to CAAS’ sister publication ARGS at the recent IATA Ground Handling Conference (IGHC) in Paris, as he marked his first year of being in post.
“In the short-term we are seeing a spurt of opportunities in airline outsourcing – more than we can deal with at the moment,” adds Brady. He was tempted a year ago to help nurse Swissport back to health – leaving the Group CEO role at Esken (formerly Stobart Group) – by the mission set by the private equity funds that took control of the firm through a debt-for-equity swap from China’s troubled HNA Group.
Although the outsourcing of ground services is hardly a new story for a trend that began in earnest in the late 1990s, it is a story that still has a long way to run. “The outsourcing trend accelerated after Covid,” says Brady. “This creates business opportunities for Swissport, which we are very actively pursuing.”
Swissport does this by growing its business with existing airline customers, by winning new customers, by expanding in non-core business lines, like airport lounges, and also by establishing operations at new airports. “For aircraft handling, we expect annual growth of the accessible market of around 17% per annum until 2025,” says Brady.
“A part of this is Covid-related rebound and will level off in the medium term. Pre-pandemic annual growth was around 4%,” says Brady. “In cargo handling, we have a more stable market, which was less affected by Covid. Here we expect growth of 7% per annum in the medium term. This is still very attractive, especially as it comes with higher margins. We therefore overweight cargo in our medium-term strategy.”
“There is definitely a sea change we are seeing at the airlines as they are recovering from the Covid crisis, eager to secure cost efficiencies. Covid has brought a focus on that,” says Brady. “And as a global specialist in ground services and cargo handling, we should always be able to provide a better service at a lower cost than airlines and airports could do themselves.”

Partnership approach
Brady says Swissport is often a deeply integrated partner to the airlines it serves, a partner whose people hold airline brands close to their hearts. “Our passenger service agents often wear airline uniforms,” he notes. “We are working with airlines to implement measures that make our people feel they are part of the eco-system – training, of course, but also aspects like staff travel benefits.”
Any self-respecting services chief will say that the reality in the services business has been a race to the bottom in recent years, with cutthroat pricing to win contracts. Airlines have benefitted from bargain prices, but often at the expense of service quality. And Brady has a clear plan here.
His strategy couples a desire for outsourcing deals with airlines where it would take over a major hub, while in parallel “finding a contract structure that works for us and the airlines”.
This means moving away from a flat price model to one where the handling price “rewards a wider flight schedule over a peaky schedule. We want proper, long-term partnerships, so contract structures do need to match the schedule, volumes, and labour,” he explains.
“We regularly look at the profitability of each airport, especially when flight volumes increase, or a large chunk of activity is taken out by an airline. Regardless of the reasons, it changes the overall picture,” says Brady.

A ‘proper’ collaboration structure
Swissport’s new contract with a large Brazilian carrier is a “great example” of such a deal, says Brady. This multi-year agreement sees the handler providing ramp, cleaning, and cargo services at the airline’s hub. There is a “proper collaboration structure that reflects the schedule and the cost of labour,” says Brady. “The more flights are off-peak, the more money the airline gets back. The peakier the schedule gets, the more it costs,” says Brady.
Some airlines are “very receptive” to this approach, especially those who have been suffering pain in their schedule delivery over recent months.

Hub outsourcing challenge
Persuading airlines to outsource a hub operation is not easy, acknowledged Brady, who understands the airline perspective on services from his days at easyJet and Stobart.
However, “airlines have got to get their head out of the sand” on the question of outsourcing. “We are more than happy to provide it for them, fulfilling and exceeding their expectations in terms of service and cost. We are on a mission to turn Swissport into not only the largest but the most trusted partner for safe and reliable airport ground operations,” Brady says.
His belief is that Swissport has unique experience in running complex hub operations, for example for Lufthansa’s regional fleet at its Munich hub, for the Swiss hub in Zurich, Qantas in Sydney and Melbourne, and several large base operations for easyJet. “We are the only real operator that does very large bases around the world and does massive hub out-sourcing,” he says. “Swissport is a one-stop-shop for airlines.”
Hub outsourcing is Brady’s preference because of this expertise and because it delivers “long-term quality revenue” and scale to match Swissport’s growth ambitions. It is in talks, for instance, with TAP Air Portugal about a deal for its hub operations in Lisbon and has recently announced its acquisition plans for Alitalia’s entire ground handling business at Rome’s Fiumicino airport.

Growth and consistency
Brady has arrived at Swissport at the bottom of the cycle and is on a mission to restructure this huge handler, which has undergone significant pain and down-sized along with everyone else during the pandemic. A lot of work has gone on behind the scenes with the shareholders to establish a plan on how to put the firm back on track. “I have a clear vision on what’s needed,” he says.
Brady’s main priorities are safety, retaining and growing Swissport’s customer base, and to deliver a fantastic operation. The firm is run with a kind of decentralised or “franchise” model in which its eight regional sub businesses run as semi-independent business units, each with a leader accountable for running the business in that region. The financial statements from these regions make it easy for Brady to monitor their business performance, but it is tougher to monitor customer satisfaction. For that reason, Brady has brought in the Net Promoter Score (NPS) methodology, which is measured weekly.
“I really wanted station managers to connect with our customers, and this is a leading indicator, giving us a pulse [of what’s going on] at a ground level,” says Brady.
Using NPS enables Brady and the central management team in Zurich to compare station performance for the first time. “We have 850 customers worldwide, so how do we manage all of this consistently? This business has been borne out of acquisitions. We do a fantastic job in one place, then a mediocre job in another, for the same customer, where the core processes are the same,” he says.
Achieving consistency will not be easy; however, it is an important goal. It comes alongside a huge staffing ramp-up for Swissport in 2022. Its plan is to add 17,000 people by the end of the year, increasing its total staff to 65,000. The challenge is not only to get people in the door; it is keeping them, says Brady.

A clear ‘people plan’
Swissport has a clear “people plan”, which is critical for a business where 70% of the cost base is people. It wants to be the “Amazon of recruitment and the Apple of engagement”, by utilising recruitment campaigns, social media, and employee engagement initiatives. The key players in making this effective are the station managers.
“I am not sure where all the people have gone,” says Brady, of the staffing shortages. The hotspots where recruitment is most difficult are the UK, Europe, Australia, and the USA.
Brady is focused on building a business that has a solid future with strong top- and bottom-line performance. In 2019 the business posted revenue of €3.2 billion ($3.25 billion). “In 2022 we will not be far away from that, and we will be above that in 2023,” says Brady. The aim is for a business with revenues in the €5 billion ballpark by around 2027.
Swissport is also on the lookout for acquisition opportunities. “Over the next 3-5 years, there will be consolidation between the big players, and we want to be leading that,” says Brady. It has a war-chest that enables it to contemplate any deal that comes along. A move for Menzies Aviation would have been interesting, but anti-trust complexities meant it was not a deal that Swissport pursued. Menzies is instead being acquired by Agility and NAS.
From acquisitions to outsourcing and the challenge of ramping up a major people business, Brady has a huge task at Swissport. But it is one he appears to be relishing.