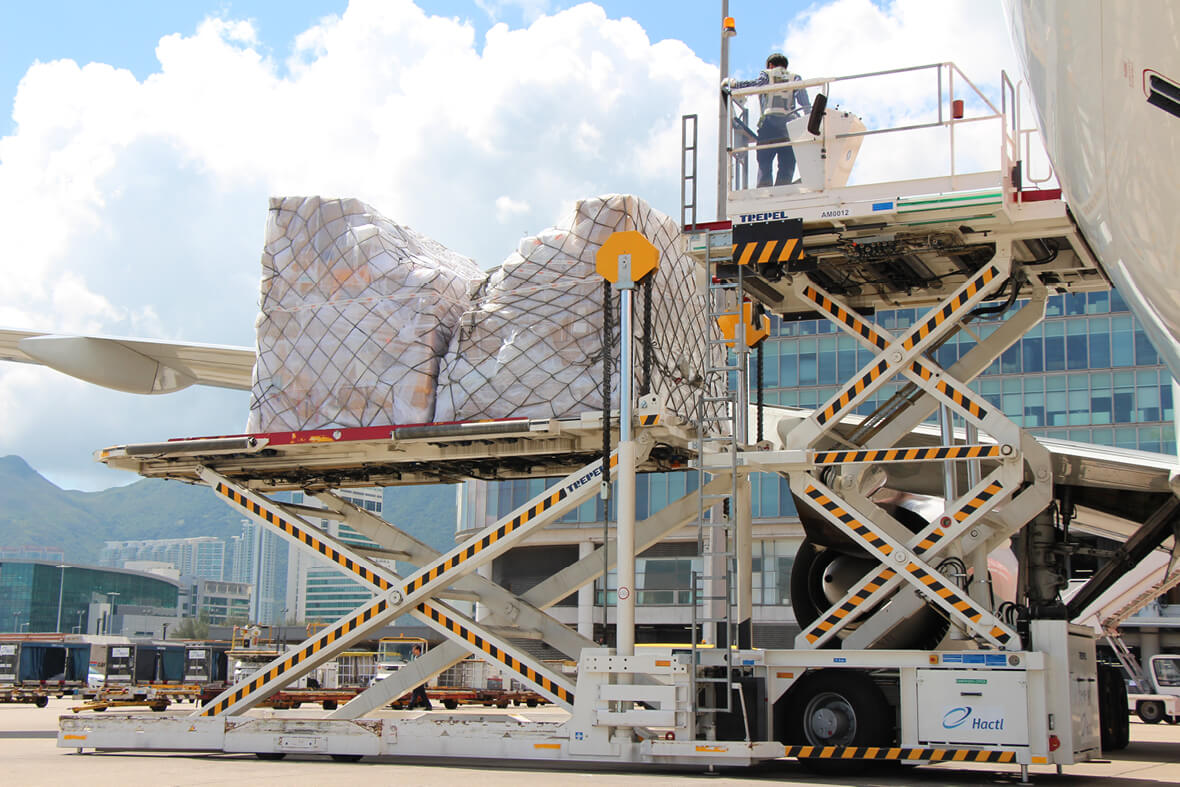 Their airline clients may still have a lot of widebody aircraft on the ground, but GSSAs have reported strong increases in their business in the last 12 months – despite airlines’ growing use of digital booking platforms.

For example, ATC Aviation Services, which has a network of offices across Europe and the Americas, China, India and South Africa, handled 170,000 tonnes of air freight in the first seven months of the year, an increase of 31% over 2020, says CEO Ingo Zimmer – although that is admittedly compared with an extraordinary period last year. According to Zimmer, ATC has been dealing with an “incredible number of tenders” every week.

In part, this growth is due to record high load factors, but there are also many airlines looking to GSSAs to shoulder more business. “We’ve gained a lot of new customers,” Zimmer says. And there will likely be more.

“Airlines want to get rid of fixed costs. The process of outsourcing is ongoing,” he observes.
Stephen Dawkins, CEO of Air Logistics Group (ALG), also sees “many opportunities”, noting: “A lot of airlines are looking at outsourcing. There are many new airlines that are looking to a third-party company to sell and manage their capacity.”

“Total cargo management is usually for smaller or mid-sized airlines, but some bigger ones are also using it,” remarks Zimmer. ATC does not have a complete outsourcing contract at this point but is currently working on such an arrangement with an airline.

Multi-market deals
While many carriers are still balking at the idea of outsourcing their cargo department altogether, there is a growing willingness to engage with a GSSA for more than one route or market, he reports. ATC recently signed two agreements that give it the respective airlines’ capacity to sell across Europe, and another recent deal is for six countries.

“In the past there were lots of single contracts; now there are more global and regional deals,” Zimmer says.

In light of the shortage of lift to meet demand, which has driven load factors and yields into the stratosphere, airlines might feel tempted to simply put their capacity on a booking platform, but most are leaning on their GSSAs to maximise their loads.

“Airlines want to maximise the tonnage on their aircraft. They’re looking for more services from us,” says Joe Lawrence, president of Airline Services International (ASI).

Servicing what you sell
“This is where the second ‘S’ in ‘GSSA’ comes in,” says Dawkins. “It’s not just selling, but servicing what you can sell. Get as close as possible to the airline, work with handling companies and truckers. It’s about taking ownership of cargo.”

Because of this, he and Zimmer are not fazed by the traction that booking and pricing platforms like WebCargo or cargo.one are gaining.
“Airlines are using platforms just for booking. That’s maybe 5% of my job. We have to plan the flight, make sure ULDs are available, organise truckers, and a lot more,” Zimmer explains.

Moreover, these platforms are almost exclusively used for general cargo that does not require any special attention. “A lot of shipments are not standard, and not everything is point to point. You may have to interline cargo, or you have a transit through an airline hub,” Zimmer says.

Jens Tubbesing, CEO of Airline Network Services (ANS), views these platforms as a logical progression in the industry’s move to digitalisation, but he points out stumbling blocks. “The question is what happens if things don’t go to plan, if there’s a problem with the documents, or three boxes are missing?” he remarks.

GSSA booking platform
ATC is close to launching its own online booking platform. It will first come into play in Germany for capacity on one or two of the company’s airline clients, says Zimmer. Subsequently, it will be rolled out through the GSSA’s network, with more airlines coming on board. The ultimate goal is for all participating airlines’ capacity to become available for online booking in all 32 countries where ATC has a presence.
Fast access to pricing needed

In the current market conditions fast access to pricing is critical. “The key is how quickly can you get a quote from an airline to customers so they can book as fast as possible. That’s going to be key for the next two years,” Dawkins remarks.

“Digitisation is the key. We continue to digitalise our business,” he continues, adding that this extends far beyond websites and booking, including elements like back-office functionality, providing accurate information to forwarders and speed to market.

Zimmer is also driving digitalisation with a view to automating more time-consuming processes. ATC has introduced bots that read e-mails from customers and enter the monthly bookings into the system.
“We’re also working with the data lake, where we’re using information from different sources, for example to do market studies for airlines,” Zimmer says.

Market intelligence role
For ALG, market intelligence, obtained from several sources, is also an important tool. “We brief airlines on markets and where to go,” says Dawkins. These briefings include information about challenges and opportunities to find solutions as well as on issues in other modes serving those markets.

“We encouraged airlines to open direct flights to some destinations, maybe with smaller aircraft. For example, fly direct to Philadelphia with a preighter instead of flying a freighter to Chicago and trucking to Philadelphia,” he explains.

One new element that GSSAs have had to grapple with is the rise of passenger planes flying cargo missions.
“We’d never done cabin loading before,” says John Gilfeather, sales director of NAS. “For a lot of airlines, cargo was a by-product. In the pandemic, cargo had to cover the cost of the entire operation. We had to understand the full operational costs and present a business case to operate as cargo-only.”

When NAS worked with Avianca on such plans, it had to take the carrier’s full network into consideration, not only the route from the UK to Bogota, he recalls.

Slow return of belly capacity
Zimmer does not expect belly capacity to make a full return to pre-Covid levels any time soon. He notes that people tend to travel regionally rather than longhaul these days. Moreover, airlines have increasingly been deploying narrow-body passenger planes like A320s and B737s on international routes, replacing small widebodies, he adds.

ATC has a number of freighter operators in its airline portfolio, which make up the majority of the GSSA’s overall lift at its disposal. “Capacity on passenger flights is limited. The key is freighter capacity,” Zimmer says.
The company set up a charter department during the pandemic. In addition to scheduled activity, it has organised quite a few charters over the past 18 months. “Our charter department has been super busy,” Zimmer explains.

Charter service need
For ALG, charter has been a huge part of its activities recently. “We’ve matched airlines to provide solutions. We’ve operated over 2,000 charter flights last year,” says Dawkins.
Charters have also been a massive part of Air One Aviation’s business. In the first 12 months of its tenure representing Aerotranscargo, which had previously fielded its four B747-400 freighters purely on an ACMI basis, the GSSA generated over 145,000 tonnes of cargo for over 1,300 flights.

Canada-based ASI demonstrated that GSSAs can do more than serve exports from their home patch. It has organised several charters this year, of which some were into Canada, reports ASI’s Joe Lawrence.

Backhaul sales role
Opportunities for charters have increased markedly. Dawkins points to Chinese freighter operators that have recently begun to expand internationally. While their outbound loads are strong, they need support to market the capacity on their planes on the backhaul, and ALG is happy to assist.

Dawkins sees this as an attractive opportunity for the coming three years for GSSAs. “We can generate maximum yield for the airline,” he says.

By the same token, the move of a growing number of forwarders to secure dedicated freighter capacity to serve key markets opens opportunities on the backhaul for GSSAs to sell excess capacity, notes Zimmer.

New lines of business
Attempting to broaden the scope of services they can offer to their airline clients, GSSAs have also added new lines of business. ATC added on-board courier service to its portfolio. “In each of our origins we’ve got one OBC that we represent,” says Zimmer.

ASI has had good experiences with OBC business over the past few years. During the pandemic it changed providers. The new set-up gives Lawrence and his team more scope for selling.
“Besides door-to-door by air, we now offer door-to-door by ground as well. That’s changed the dynamics a bit,” he reports. “With OBC we were limited with the size of our shipments; now we have no restrictions with size.”
ALG is also broadening its portfolio. “We continue to diversify. Selling is now probably only 25% of our business,” says Dawkins.

Interline changes
Over the years, the larger GSSAs have leveraged their networks to create more possible routings and business opportunities. The cull of passenger flights has put a serious dent into this. Not only are widebody flights still down massively, but the airlines have ditched their interline agreements, as they see little merit in sharing revenues for a shipment if they can claim full price on the route they cover.
“Many agreements have expired,” observes Ron Buschman, managing director of Aerodyne Cargo Services. “With some carriers, we’ve renegotiated and are paying higher rates now.”
ASI has continued to feed traffic to airline clients that are offline in Canada, but doing this has been fraught with challenges. “It’s not an easy process,” says Lawrence.
To feed one Middle Eastern airline client, ASI has to move the cargo to Europe. “I have to request a rate for each and every shipment,” he says.

Tubbesing notes that there are considerable differences between markets. Given the small number of airlines that serve Africa from North America, interlining is often in play in this trade lane and remains an important element.

“The question is, are the numbers adding up?” he muses.

Trucking challenges
Trucking has also brought its challenges, with capacity tight and rates seriously higher. “It’s so difficult to manage capacity because the onslaught on the inbound side is overwhelming the trucking network in the US,” Tubbesing says. “Plus, on top of it we have the new security guidelines and requirements,” he adds, referring to the new mandate to screen main-deck cargo.

“If you haven’t got a full trailer to deliver, the LTL will screen your cargo, but then it goes with four or five other shipments, and the truck is opened several times. Your cargo becomes an unscreened shipment,” he highlights.

The offline business is getting a little bit less attractive because of the trucking rates,” says Zimmer.

For ASI, trucking cargo to US gateways for a Latin American client airline only works for maindeck cargo. Rates from Miami to Viracopos are between $3 and $5 per kilo, but European carriers offer less than $3 to fly cargo from Canada to their hub and back across the Atlantic to Brazil, notes Lawrence.

“With the trucking component to Miami, only cargo that requires freighters makes sense,” he says.

The pandemic and the restrictions it entails have slowed down GSSAs’ push into new geographies; but they haven’t stopped it altogether. For ASI, India was a major target before the pandemic. Since the outbreak, it has still added cities there to its footprint.