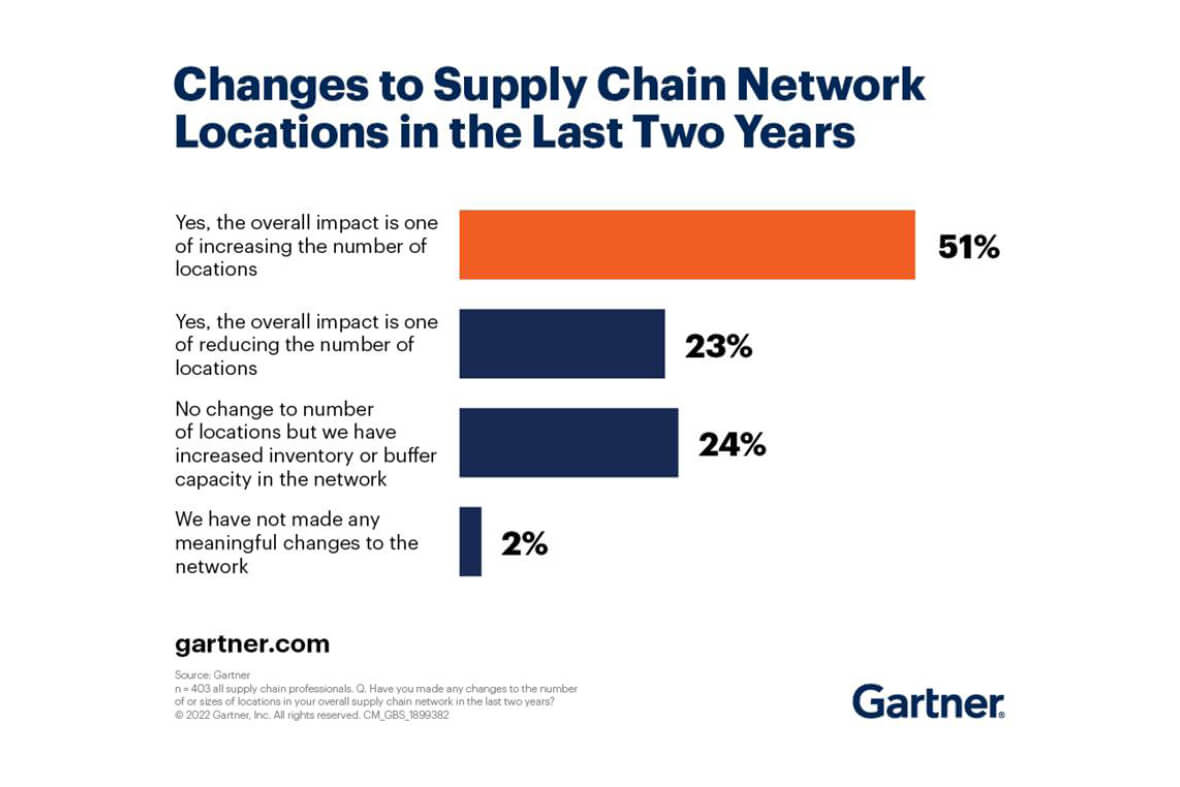 Reversible decisions favoured
“There’s clearly a supply chain redesign underway, but not everyone is moving in the same direction or even to the same extent,” said Kamala Raman, VP with the Gartner Supply Chain practice. “Supply chain leaders have been modifying networks in a number of ways, be it with expansions, consolidations or simply modifications to buffers – which are more reversible than footprint decisions.”
The resulting networks span a variety of operating models. Twenty-eight percent of respondents now describe their network as a hybrid regional model – a combination of local or regional elements in a global supply chain network. This is closely followed by global models with regional final assembly (23%) and local-for-local networks (22%), Gartner noted.
“While the range of scales and approaches is wide, supply chains are undoubtedly on the move. Over half of participating organisations report making changes to manufacturing and supplier networks supporting at least 20% of revenue,” Raman added.

‘China Plus One’ approach
In supply chains with a presence in China, 95% of survey respondents are evaluating or executing changes to their China sourcing and manufacturing strategy, and 55% of those already acted on their plans.
However, the survey data does not show strong signs of large-scale nearshoring to developed markets. Supply chain organisations are examining a ‘China Plus One’ approach that leaves most of the China-based network intact and places net new additions in other markets, or a diversification strategy that still holds significant sourcing or manufacturing in China, Gartner noted.
As a result of the diversification away from China, many countries in the rest of Asia are profiting from net new foreign direct investment. There are also regionalised Asian networks emerging which are driven by coordinated industrial policies, such as the Regional Comprehensive Economic Partnership (RCEP) or the Comprehensive and Progressive Agreement for Trans-Pacific Partnership (CPTPP) trade deals.
“The signs are clear that in a fragmented world, global firms have been making changes to their heavily cost-optimised, one-size-fits-all networks, and now favour a mix of global, regional or local elements. Investments into other parts of Asia – outside of China – coexist with expanded investments into developed markets as organizations take advantage of generous national/trade-bloc-level trade incentives,” Raman concluded.
cluding greater use of longer-

BLR Airport emerges as the No.1 airport for perishable shipments for the second time in a row