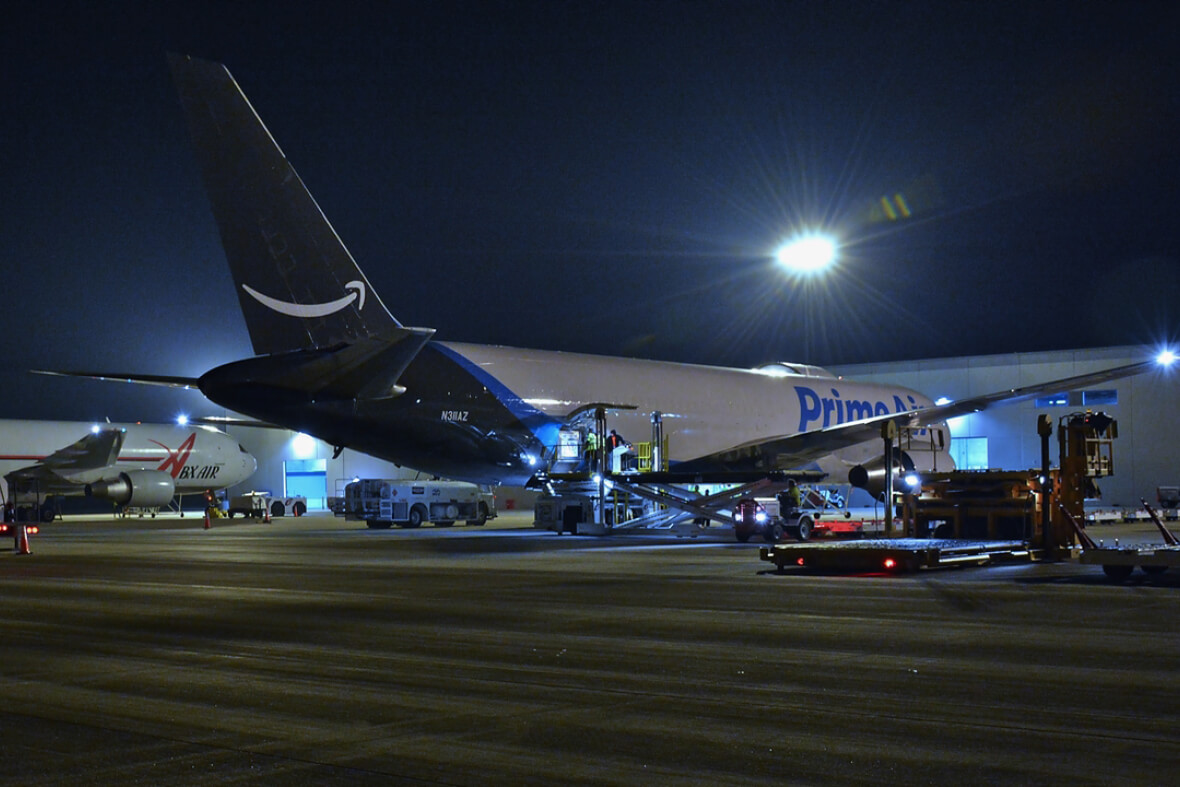 Moves by air cargo carriers and forwarders towards non-passenger hub airports precedes the pandemic. But Covid-19 has sped that transition, reports Will Waters

The shift towards freighter services since last year has, unsurprisingly, pushed a larger share of global air cargo tonnages through freighter-specialist airports – such as Liege (LGG) and Leipzig (LEJ) airports in Europe and US airports such as Chicago Rockford International (RFD), Fort Worth Alliance (AFW), and Ohio’s Wilmington Air Park (ILN).
Indeed, a study in March by the Chaddick Institute for Metropolitan Development at DePaul University found that the domestic US tonnages handled at the 14 largest US ‘cargo-focused hub airports’ – those with extensive cargo traffic but little or no passenger traffic – grew by an average of 31% in 2020. With eight of the top ten also served by Amazon Air, which expanded rapidly in 2020, much of this growth was driven by a surge in online retail traffic.

Indeed, the figures are skewed somewhat by the massive growth last year at Wilmington Air Park, which saw domestic US tonnages expand almost fourfold (+289%) as a result of Amazon Air investing heavily there, establishing it as its fifth largest hub, the Chaddick report highlights. Amazon operates roughly 15 flights from the airport daily, despite having a heavier concentration of flights at Cincinnati/Northern Kentucky International (CVG) less than 100 km away.

Nevertheless, RFD (+18%) and AFW (+47%) also recorded substantial growth, both serving as integrator hubs – for UPS and FedEx, respectively – in addition to an Amazon Air base.

As highlighted in the North America report in this magazine (page 4), Swissport’s Peter Kohl says volumes are now at a historic peak at some major US airports, to a point where warehouse and ramp capacity have become limiting factors at bigger gateways like Chicago (ORD) or Atlanta – where cargo handlers are operating beyond the capacity of their warehouses. For example, ORD registered 14.8% higher throughput last year, with freighter flights up 25%.

Volatility easing
Although the volatility that characterised the early months of the pandemic has abated, making planning easier, resources are still more frequently stretched by the larger number of freighters compensating for the lost belly capacity – which for cargo handlers means larger volumes to be handled over shorter periods of time.

Reto Hunziker, cargo director for air charter broker Chapman Freeborn Group, says most airports and cargo handlers have been “adapting fast and well to the new situation”, noting: “There are some bottlenecks here and there, but in general it is working well.”

He notes one upside, highlighting: “We saw a more friendly approach of the passenger-focused airports. Since the PAX business went down, they are now more open and flexible for cargo flights.”

Ken Ryan, director of cargo at RFD, points out that “the moves by air cargo carriers and forwarders towards non-passenger hub airports precedes the pandemic”, citing Liege, Hahn, LCK and RFD as examples.
“What has happened is that Covid-19 has sped that transition as a result of major delays in retrieving cargo at overburdened passenger hubs,” he explains. “They are not really to blame and they are not alone – look at the ocean ports and general logistics chain issues.”

He anticipates this trend in air cargo continuing, highlighting that “prominent air freight forwarders are signing long-term leases in RFD. It will be some time before all this turmoil settles. The resulting long-term trends will then be more apparent,” he notes.

“Still, those trends will be pushed aside for the next wave, eventually.”

Forwarder factors
Others have also highlighted that freight forwarders are increasingly developing their own-controlled charter networks as access to guaranteed capacity has tightened.

Hunziker notes: “We see a big demand for own-controlled capacity – not only for the big forwarders but also from the mid-sized forwarders. We see this continuing since they want to make sure they can offer a continuous and reliable product towards their customers.”

Steven Verhasselt, commercial director for Belgium’s Liege Airport, believes this trend towards freight forwarders “integrating, in order to secure capacity” will continue, “as long as demand is strong and demand outsizes supply for a considerable time during a year”. He says freight forwarders “look first to fly into airports where they already have facilities”, which “gives an advantage to the more traditional airports”. But he says up and coming freighter airports “can overcome this with an efficient system to release BUPs very quickly”, adding: “Once the BUP is in a truck, the difference between a 5km ride and a 250km ride is very relative. It could also help freighter airports to attract freight forwarders to establish their own facilities in these hubs that can accommodate those flights – be it scheduled, charter, or charter programmes.”

Although some carriers such as Cargolux (see interview on page 10) argue that they have provided an increase in capacity ex-Asia this year for most of their major clients, the rapid growth in demand for space ex-Asia means even those still offering long-term capacity agreements are not able to satisfy their clients’ complete needs.

That said, given the current high prices and the level of uncertainty over how much more capacity will come back into the market this year, “long-term pricing – when you talk about six months or 12 months – doesn’t make a lot of sense at this stage, whether it’s towards the customers or from the carriers”, says Mads Ravn, executive vice president for air freight procurement at freight forwarder DSV.

Cargo airport agility
Ryan says speed of processing is one of the key advantages of cargo-specialist and cargo-only airports – and their responsiveness to changing circumstances.

And he highlights “agility” as one of the key advantages of cargo-specialist and cargo-only airports in enabling airports and cargo handlers to manage the shift towards greater use of freighters or rapid changes in freighter routings and services. “It starts with embracing change,” he notes, and “requires thoughtful vision and thoughtful investment in the areas which will create the circumstances which allow for speedy decision-making and action”.

But Ryan says there can be considerable risk involved, noting that RFD recently “sold $50 million in bonds to finance two ramp-side facilities, totalling 190,000 sq ft; truck parking; a new access road; and parking for an additional six 747-8Fs”. The first of the two buildings is completed and fully leased, and building 2 will be completed by December.

Demand-supply outlook
But in the shorter term, many commentators believe strong demand for freighter capacity will continue for some time.

Hunziker comments: “We think the market will remain the same for at least this year. PPE requests might go down towards the end of the year; however, other verticals like e-commerce, pharma, high-tech, automotive and general cargo will have a stronger demand.

“We expect a strong peak season with high demand during Q3 and Q4. It has then to be seen what happens when PAX demand comes back to an increased level. The ramp-up will take a while and will be based on travel demand. Considering this, we expect that access to freighter capacity will remain challenging.”

Longer-term perspective
Liege Airport’s Steven Verhasselt says that during the last 18 months, there have been a lot of issues and demands that have been “all short notice and ad hoc”, but there is also a need to keep one eye on longer-term perspectives and priorities. “We have seen the PPE material charters, the focus on vaccine transportation, and on to the next big thing. While it is a great achievement for the industry that we manage this, I also think we should not forget the basis and the long term. Perishables, live animals, automotive, garments will remain the bread and butter for freighter operators, and for the air cargo industry.”

He concludes: “As much as I am ready to change, I also urge people to keep the focus on our existing business and our long-term partners.”