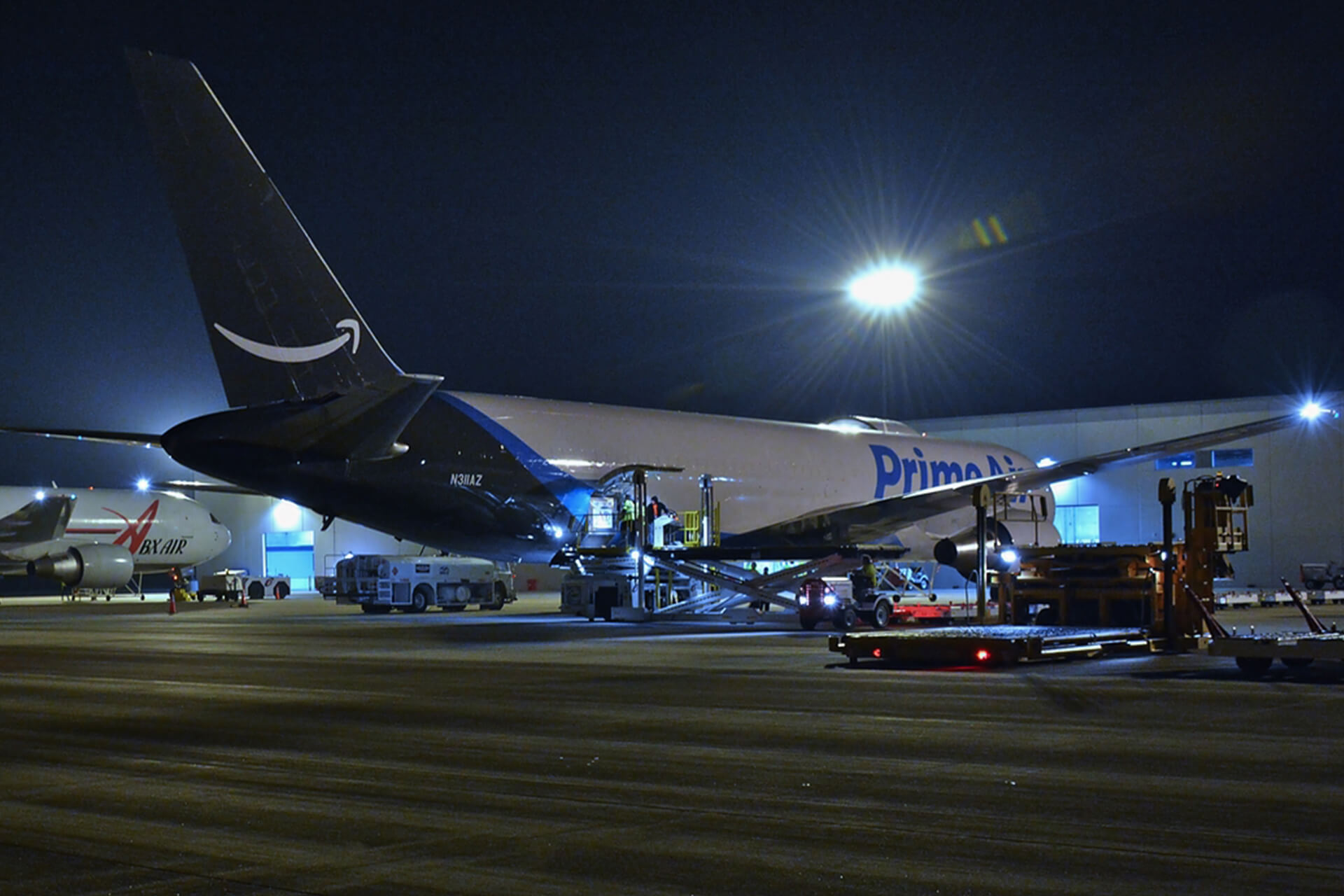 PPE traffic and soaring e-commerce volumes, combined with staffing challenges, have kept up the pressure on airport cargo operations despite the collapse in airline belly capacity, reports Ian Putzger

Like their counterparts in other regions, North American airports are still coming to terms with the new reality of near-empty passenger terminals and overflowing cargo facilities. At Hartsfield Jackson Atlanta International Airport labour on the cargo side has been a problem. Handlers reported losing staff every time there was a spike in the COVID-19 infection rate in the area, said Elliott Paige, director of air service development.

“We try to get people let go by the airlines, but they had to give up their badges. We’re getting more cargo – PPE, e-commerce – but not enough staff and we’re not badging them fast enough,” he said.

Freighter boom
This is particularly challenging as most airports have seen a sharp increase in freighter flights, which dump large volumes in one go. At Edmonton International Airport freighter flights were up 58% in May. One weekend saw three Antonov 124 freighters arrive within 24 hours.

Passenger aircraft used for cargo missions have been another challenge, as the loading and unloading process is slow and labour-intensive. Vancouver International Airport has hosted more than 600 of those ‘mini freighters’ since March, according to Jason Tse, manager commercial leasing – cargo.

Rickenbacker airport staff came up with a home-grown solution for passenger aircraft on which the seats have been removed. Working together with the airline’s engineering division, they obtained permission to bring portable roller conveyors on board, which are rolled out and tilted to facilitate the movement of boxes.

“This not only sped up the unloading process, it also allowed us to do it with less manpower and decreased fatigue to our staff,” reported Bryan Schreiber, manager, air cargo business development at the Columbus Regional Airport Authority.

Rickenbacker saw a record breaking 120 international freighter arrivals in June, which also set a new record in monthly tonnage for the airport. With PPE flights easing, that volume was not sustainable, but July’s tally was still higher than expected, Schreiber remarked.

While the passenger hubs clocked up volume declines, cargo airports have gone strong. Chicago Rockford International Airport had an increase in cargo north of the 30%mark in the first quarter, and the second continued strong.

“Through June we’re up 25%, year on year,” reported cargo director Ken Ryan. He was particularly pleased about the inception of a weekly 747-400 freighter in June, when Senator International extended its dedicated transatlantic operation to Rockford. “We’ve been working for years to get a big scheduled freighter that brings heavy freight,” he said. Most of the airport’s growth in recent years has been from parcel traffic of UPS and Amazon.

Forwarders have been a driving force at Rickenbacker as well. Between mid-May and late June Wen-Parker Logistics organised a string of charters from Hanoi to the airport.

According to Schreiber, this is not the only forwarder that has organised charters. “We’ve seen some come in with charter programmes,” he said, adding that some have expressed interest to do more.

Cargo airports gaining traction
Such developments suggest that cargo airports are gaining more traction, potentially for the long term. Schreiber is wary of the comfort of established routines for operators, but he does see indications of heightened interest in alternative gateways.

“Innovative companies are catching on. It started with some of our smaller, nimbler fashion forwarders and their airline partners, but the big guys are catching on,” he remarked.

“Our passenger business was hit very hard. At one point we were down in the 90% range. More recently it started to come up, then the second wave of infections flattened the curve again,” reported Emir Pineda, manager, aviation trade & logistics at the Miami-Dade Aviation Department, which manages Miami International Airport. During the summer months several international carriers resumed flights to the airport, bringing back important belly lift.

Some sectors have been hurt by the implosion of belly capacity. For some exporters in the catchment area of Seattle-Tacoma International Airport (Sea-Tac), such as shippers of live shellfish, the passenger schedule – with multiple daily departures to major markets like China – was perfect, noted Tom Green, the airport’s senior cargo manager. This cannot be replaced with freighters, given frequencies and transit times, he added.

The surge in freighter activity was fuelled primarily by the scramble for PPE imports. This segment aside, the chief engine for increases in volumes around North America has been the explosive growth in e-commerce.

At Sea-Tac, freighter landings were up 6% in the first half of the year. “A lot of that is e-commerce,” said Green.

Rockford rise
Rockford’s 25% rise in throughput over the period was driven chiefly by the parcel traffic of UPS and Amazon, the airport’s largest users.

E commerce went a long way towards alleviating the slump in belly cargo. Despite the loss of international passenger connections, Edmonton’s volume was up 7% in the first three months, and traffic continued strong in the second quarter, reported Lowe. Likewise, Sea-Tac suffered large drops in its belly cargo (a lot on international sectors), but gains in freighter traffic brought overall tonnage close to the level of the first six months of 2019 (down 0.3%).

Miami and Dallas/Fort Worth (DFW) also lost large chunks of their passenger flights but managed to contain decline in cargo throughput to single digits.

Several airports, including DFW and Rickenbacker, are working with the US Customs & Border Protection agency to develop solutions that can speed up the flow of e-commerce while maintaining adequate security standards. Initially much of the e-commerce flow into the US has gone through the coastal gateways, but interest in inland gateways, which offer shorter distribution distances, has been growing, noted John Ackerman, executive vicepresident, global strategy and development at DFW.

Prior to the outbreak Miami positioned itself as a gateway for international e-commerce flows to Latin America. It became a designated external customs entry point for e-commerce headed to Brazil under a scheme offered by the national posta service. These goods are routed through Miami and pre-cleared there, allowing for shorter transit times in Brazil.

These flows dried up with the spread of COVID-19 but re-started in the summer. Pineda had plans to develop similar arrangements for other Latin American countries, which have been postponed for the time being. Apparel firms in the US have shown interest in order to get better access to the region, he said.

Lower transit activity
The loss of belly connectivity has undermined transit activity, but the fundamentals remain unchanged, said Ackermann. “The market is still there; the strategy is still sound,” he commented.

DFW has positioned itself as a transit point for traffic between Asia and Latin America. Progress there suffered a setback by the suspension of Avianca’s A330 freighter link between the airport and Bogota. On the other hand, Qatar Airways’ freighter from Latin America to DFW and on to  Europe has been full coming in, Ackerman said.

Capacity squeezed
While passenger terminals are near-empty, the relentless increase of e-commerce is squeezing cargo capacity at a number of airports.

“With the rise of e-commerce, our stations are busier than ever. One of our challenges is that facilities are not easy to come by,” said Mena. He described Houston, Boston, Atlanta and Chicago as extremely congested. Swissport is also looking for expansion opportunities in LA, San Francisco, Seattle and New York JFK.

Vancouver opened a ‘locked’ cargo facility (to keep screened and unscreened flows separate) and plans to introduce a facility for tail-to-tail transfers in the fourth quarter.

“We have plans underway to address the immediate space needs for one of our integrators and we are looking at longerterm needs for supporting players in the e-commerce space, while cautiously keeping in mind how e-commerce logistics may potentially mature in coming years,” remarked Tse. Beyond that, he is looking to shift focus more to the marketing side and pursue CEIV Fresh.

Sea-Tac also needs more cargo capacity. “The need to grow on the cargo side is still with us,” said Green, stressing that airport investment decisions should take the different dynamics of the various business segments into consideration. E-commerce capacity development especially cannot be delayed, he added.

Edmonton, which has obtained CEIV certification, has kept adding cargo infrastructure for years, including special facilities for live animal and perishables traffic.

“We’re continuing planning for the next phase of cargo facility development,” said Lowe. Over the next 12-24 months the airport intends to move ahead with plans on airside warehouses, potentially with enhanced cold chain capabilities.

Atlanta is preparing an RFP for a cargo terminal on a 63-acre lot. “My aim is to get it out by the last quarter of this year. We’ll probably have to leave it for six months or a year so stakeholders can get together and put together a proposal,” said Paige.

The plan is for a state-of-the art cargo building that can handle any kind of cargo and includes the installation of sewer pipes and telephone lines.

At DFW the airport authority is getting more involved in the cargo business than the traditional landlord role embraced by most US airports. “We feel we need to have control over our cargo buildings and ramps,” said Ackerman.

He added that this does not mean outright ownership of the buildings. “We just need more control. There are other ways,” he said.

The financial situation of most airports puts a question mark over funding for new developments.

“We expect a 40% cut in our revenues this year, but expenditures are only cut 20%. We spend more than we’re making just to keep things going,” said Paige.

“Revenues are down, budgets are down and airlines are regularly saying they want to pay less,” remarked Green.

Some plans have slipped on the agenda. “With COVID, things like digitisation got pushed back towards the end of the table a bit,” Green said.

Swissport was aiming to roll out service kiosks this year, but this has been postponed. Mena hopes this can get under way in the first quarter of 2021, starting with the handler’s flagship facility in Chicago.

At DFW a data sharing platform was launched two weeks before the pandemic hit traffic in North America. Most of the handlers at the airport are online, so forwarders can book slots for pick-up and drop-off, but the initiative has been in low gear until recently.

“We collectively agreed we had to focus on running our business and deal with COVID first,” said Ackerman. “I think the pandemic makes it more important to have a digital platform,” he added.

In Miami Pineda wants to go ahead with the concept. “We presented our executive staff with the idea to implement a cargo community system. This would be value added and help us in future manage our airport, lower cost, reduce congestion – especially with trucking – and improve efficiency,” he said.

Paige sees one additional benefit of Atlanta’s CCS in the present situation. “It doesn’t only increase efficiency and security, there is also less danger of passing the virus via paper documents,” he noted.