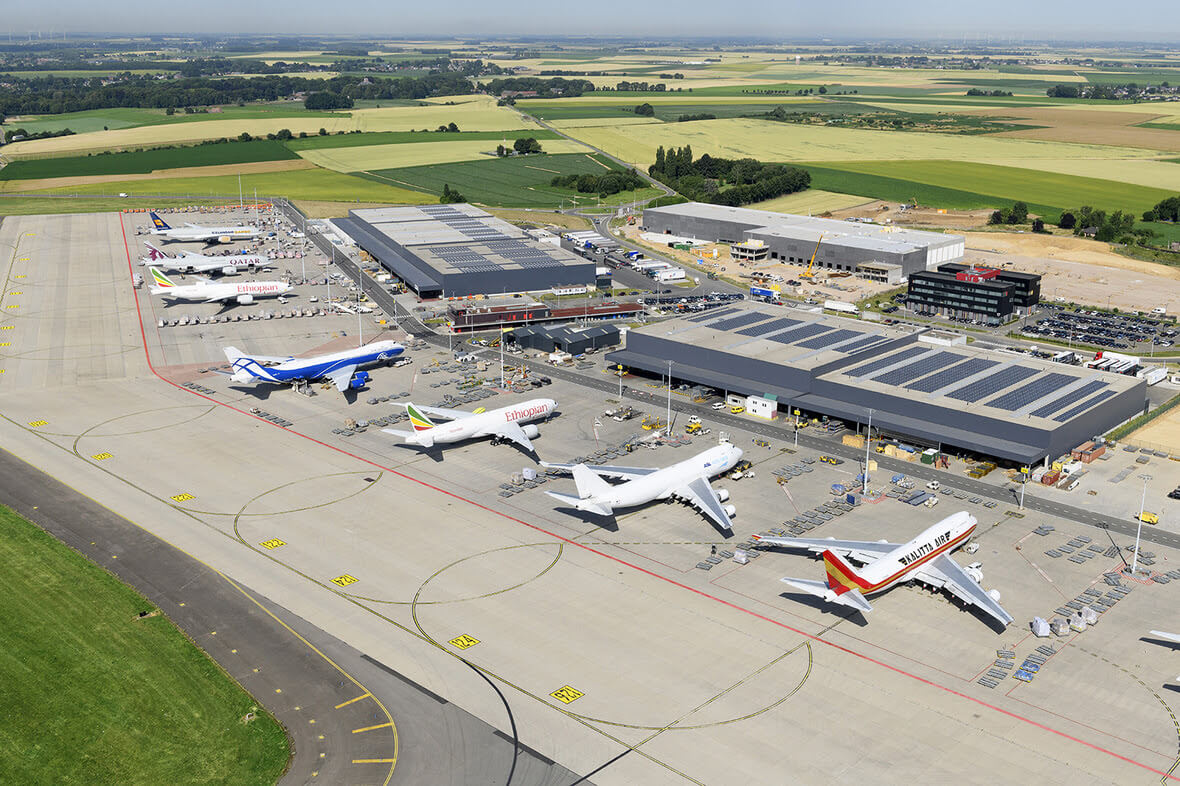 Cargo traffic patterns
Compared to 2019, we are at about the same level for cargo throughput. In the first quarter of 2020, 230,000 tonnes of cargo passed through LGG, 3% growth compared to 2019. All the cargo in LGG flies on freighters. The standstill of the belly cargo does not have any negative impact on Liege Airport.

It is clear that we noticed a strong growth on the eastbound routes to China in February, as a lot of charters with medical supplies were operated. In March and April, the situation shifted, with charters still going but now westbound. Africa remained stable, and is still doing so. The transatlantic routes are suffering for the moment.

The shift in the nature of cargo is clear from the statistics as well. The average weight of cargo on widebody freighters has come down, as the PPE materials don’t have the same density as your average air cargo. Masks and other supplies take a lot of volume, but are very light.

What have been the biggest challenges – mainly operationally, but also as a business?
From the very start of the Corona crisis, Liege Airport has been called upon to be part of the logistics solution. When only China and Hong Kong were affected, shutting down passenger routes was used to stop the spread. As a freighter hub, and well experienced with ad hoc relief flights, we drew on our playbook that was well tested during the Ebola crisis. The need for freighters to bring in basic supplies is well documented. The procedures to be put in place for the operations and the crew on board are available and ready. Honestly, we thought ourselves to be well prepared. Operations went up as expected, charters were called in and operated eastbound flights.
The global spreading of the virus, the fact that Belgium as a country and Liege Airport as a working environment got hit as well, was new to us. Meanwhile, global passenger operations have come to a near shutdown. Freighter operators looked to their preferred freighter hubs first, as everything is in place there to handle the full scheduled freighters and the charter demands.

How have you responded to these challenges?
Capacity only runs so far, and our staff got hit as well. The number of absentees climbed over 20%. This has been covered with people working harder than ever, and temporary labour brought in. Today, we turn around 120% of the normal (level) in widebody freighter operations, with less than 80% of the staff.

The demands for more charters and more capacity was still here, and we had a brand new facility standing idle. From 11 April, thanks to the support of WFS, AirBridgeCargo, Aeroservices and many others, we managed to put up a temporary ‘pop-up handling facility’ that can serve additional charter requests and add to the critical handling capacity.

Has there been any significant cooperation between stakeholders?
I am extremely proud of every member of the Liege Airport Cargo Community and every member of the global cargo community who is still coming to work every day. I fully support the applause and admiration for the first line staff in hospitals and medical care. But without the efforts of everyone in our business, they

would need to fight this war against COVID-19 without the necessary supplies. My respect goes to all those essential workers still coming to the airport to do their job, as well as to all the truck drivers and warehouse staff helping to get it all to the places where it is needed most.

What other challenges have emerged?
Due to the passenger operations standstill, slots are plentily available at passenger-centred airports and they have thrown their doors wide open for freighter operations. We see the same response from airlines. Passenger aircraft are now mini-freighters. We salute those efforts, as the need for capacity is there. The faster all the necessary medical supplies reach their final destination, the faster things can go back to normal. It is not a lasting solution, but it helps for now to supply additional capacity that is being looked for so eagerly.

In LGG, we have focused mostly on existing customers’ requirements in the first place. As our handlers are freighter experts, we managed mostly additional freighter charters. But we have received pax-to-cargo charters and will continue to do so. As long as the operators reach an agreement with one of the handlers, we will have them in LGG. As we just opened additional aircraft parking space, we manage to handle the additional ground time these flights require. The biggest issue for these flights is the increased manpower needed, and the increased ground time. As most of them are one-way charters, full in but not at all full out, our handlers are able to manage it all.

To what extent has it been possible to maintain normal levels of service?
We salute all members of the Liege Airport community for keeping up the capacity levels at all stages. This includes the LGG airport staff, the handlers, but also customs for example, who had to be very flexible as well. We have started a campaign for supporting people coming to work, a ‘Proud to work at Liege Airport’ campaign, throughout the cargo community.

From the start, and with the support of our own expert Dr Burette, we have briefed the HR departments of on-airport companies about the regulations, and the implementation at the airport. We are very well aware that, due to the nature of the work, social distancing is not always possible, but efforts have been made and encouraged. Finally, we also distributed some materials, like masks, which we received as donations or sourced ourselves.

What new opportunities have arisen?
I do believe that the importance of freighters, and freighters hubs, has been emphasised. I do hope the differentiating in operational restrictions, especially for traffic rights, is here to stay. But I also believe, in the long run, that the call to review the supply chain, and the call to keep production of essential goods closer to home, will be answered. This will have an impact on our industry.

The development of the Global Logistics Cluster, a network set up by the World Food Programme, has also come into operation as a response to the Covid-19 crisis. Liege Airport, and the LGG Cargo Community, were selected as the European hub for this programme, based on existing freighter connectivity, on airport cargo capacity and knowhow and experience with relief charter programs. LGG is proud that the platform can assist when needed most when called upon by WFP, WHO and any other aid organisation.

Have most or all strategic initiatives had to go on hold?
No, the initiatives continue and, where possible, the works have continued as well. Over the last weeks, one new handling building, the AirBridgeCargo hub, has been completed and a second one is being completed as we speak. Moreover, the works have continued to prepare the Cainiao site, which received approval for a building permit.

Liege Airport has put cost cutting measures in place, but the strategic initiatives are not being put on hold, as we strongly believe in the future. We hope that, on a regulatory level, some of the flexible rules that have been implemented, like the additional freedoms for cargo operations, remain in place. It has never been more clear that freighter operations – how they work, how they need to build up to be sustainable – are different than those of passengers. LGG has been lobbying for every freedom possible for freighter operations, ‘as cargo does not fly back to where it came from’.

What preparations do you have in place for volumes returning to more normal levels?
It is hard to predict what comes next. All the budgets, predictions and expectations have been adapted, changed, remodified, and now put away for later. Apart from #freightersfirst, Liege Airport has branded itself as ‘the Flexport’, the flexible cargo airport, since many years. We believe flexibility will remain key.

Do you have any other comments or observations about the current challenging environment?
Keep up the great work, and please stay safe and healthy, to all workers and their families in the industry.

WFS was able to complete its fastest-ever opening of a new station by transferring highly trained, experienced cargo handling staff from its operation in Brussels, ensuring full compliance with the company’s first priority of operational safety and security. Essential equipment, including forklifts, slave masters, slave pallets and a truck dock, was also

sourced from nearby WFS stations in both Belgium and the Netherlands.

Liege airport authority to support the sudden increase in demand for all-cargo operations. The building was being developed to act as a dedicated handling facility for AirBridgeCargo, which has allowed the facility to be used temporarily for this operation.

As one of Europe’s premier freighter hubs, Liege is acting as a central hub in the region for medical equipment and supplies arriving from China and other parts of the world.