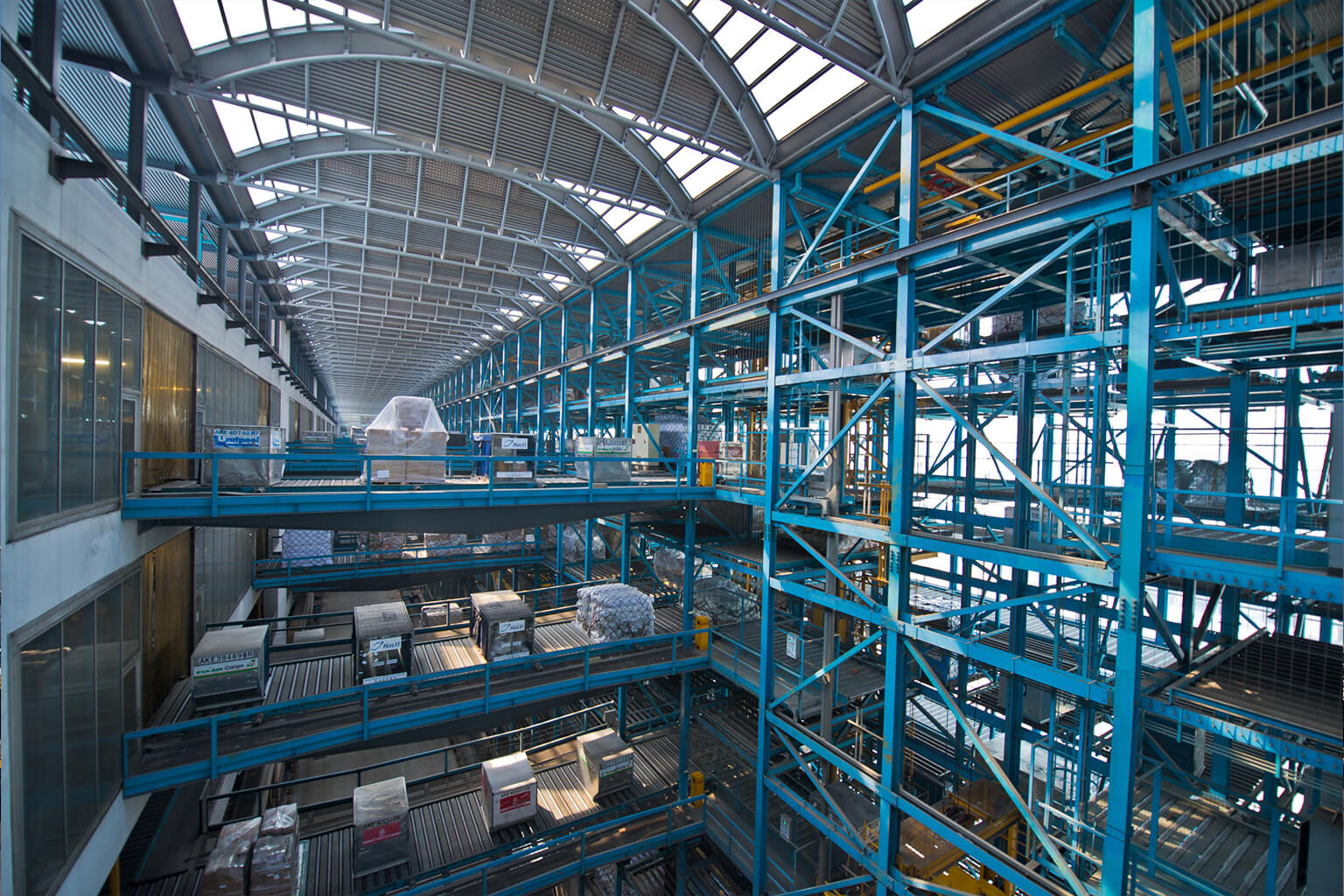 Covid-19 and e-commerce have accelerated the drive towards digitalisation, with government agencies also increasingly facilitating the shift to paperless air cargo processes. And with the benefits of automating data flows already starting to show, cargo handlers are becoming more ambitious in their plans to generate cost and efficiency gains, reports Ian Putzger

Responding to moves by several carriers, ULD providers and their technology partners to introduce greater digital visibility to the movements of cargo containers and pallets and the cargo they carry, some of the large multinational cargo handlers have been busy installing Bluetooth readers in their warehouses. Such devices have gone live in Worldwide Flight Services’ locations in four European and two US gateways, and the handler is continuing the roll-out through its network this year.

“In today’s challenging market conditions, it is more important than ever to implement new technologies that support the efficiency of our worldwide operations and which give our customers greater visibility of their cargo and assets to either generate new revenue opportunities or achieve business efficiencies,” commented John Batten, executive vice-president cargo for WFS in the EMEAA region.
Batten’s former employer Swissport has also been among the first to move. By the end of January, it had equipped 45 warehouses with the technology, and the results have been positive, according to Hendrik Leyssens, vice-president of global cargo operations.

“It allows for a lot more transparency,” he reports. “It is saving us quite some work, and the airlines as well. They don’t have to wait for our message in a specific format.”

Benefits of IoT technology
For the benefits of the installation of internet of things (IoT) technology to come to full fruition, the establishment of a 5G network will be critical, remarks John Ackerman, executive vice-president for global strategy and development at Dallas/Fort Worth International Airport (DFW). Delivering this for the entire airport will be the airport authority’s job, part of its overall digital strategy. And the complexity of the task will be a challenge and take several years, he reflects.

For handling agents, the next step is to link the IoT capability with their systems. “The next thing is to feed the data into our warehouse management system,” says Alan Glen, vice-president for cargo development at Menzies Aviation, whose organisation is currently working with two providers on the installation of IoT sensors.

In another measure to improve connectivity, Hactl has overhauled the integration between its terminal and ramp handlers. This is intended to pave the way for anticipated digitalisation initiatives that will require tighter integration and leveraging of cloud services, machine learning, IoT and data analytics technologies, reports CEO Wilson Kwong.
The integration with ramp handlers and truckers, which has started on the import side, will be extended to export operations, he says, adding that Hactl intends to continue to explore the use of robotic process automation and analytic process automation – to increase cross-platform data synchronisation speed and analytical capability.

Wearable technology
Inside the warehouse, some operators have been experimenting with wearable technology, such as smart glasses. Swissport has not used these yet, but plans to trial them. “It is on our road map to do a pilot,” says Leyssens, adding that the company has experimented with smart watches, mostly to communicate process steps. There are interesting use cases on the ramp, he notes.

Currently the company is in the process of replacing its mobile devices across the globe, having developed new software in partnership with technology provider Champ. The new technology has more capabilities and is more user-friendly than the current equipment, says Leyssens. “This will allow us to share a lot more data. It holds the key to more improvements to digitise more processes.”

The deployment of self-serve kiosks is another ongoing major initiative for Swissport. Like the installation of IoT sensors, this has been slowed down somewhat by the Covid-19 pandemic, an experience common to many operators. At DFW a cargo community system was launched last March, just before the outbreak unfolded in the US.

“Training was slowed by Covid,” recalls Ackerman. After the restrictions were lifted, the CCS was re-launched and has since attracted about a dozen companies, with the main handlers on board.

Further impetus has come from the rapid rise of e-commerce. “E-commerce is basically about two things – visibility and speed. For both of these aspects, digitalisation is extremely critical,” he adds.

E-commerce has also pushed the envelope on risk assessment, highlights Kwong. “The increasing presence of lithium battery-related products adds complexity to the cargo acceptance process, as well as the ICAO 2021 added security checks, prolonging the acceptance process and generating additional checking in the back office,” Kwong notes. “Our recent enhancements redefine the advance pre-declaration data required before cargo arrival and streamline the whole cargo receiving and handling process.”

Pre-arrival information
The old regime of a handler seeing trucks arrive without any idea what they were carrying is rapidly falling out of fashion, cargo handlers say. For starters, more and more handlers and airports are moving to a slot-booking system for trucks.

“Trucking is quite challenged. Noise about inefficiencies and waiting times have increased,” notes Glen.

Menzies has been working with technology providers to bring in a slot-booking system. The initiative started in December and quickly advanced to beta tests, which were expected to be running in February. “We start with a North American station where truck parking is not necessarily ideal,” says Glen.

Swissport has been operating a door and yard management system in Frankfurt since last November that automates the entire process. Forwarders book slots and receive access codes, which the truckers scan in upon arrival from their mobile phones and the system assigns them to a truck door – for instance at the pharma centre if the truck is carrying pharmaceuticals. The system keeps track of available doors and staff numbers and notifies employees which truck is at which door.

“We connected our tools to Frankfurt’s community system. It’s easier for forwarders to have one platform to use,” says Leyssens.

Truck management priority
Truck management is often the first functionality of a CCS that come into play. DFW and Atlanta Airport, which spearheaded the proliferation of such platforms in the US, both started off with this aspect.

At this point it is too early to tell how much the slot booking functionality has impacted truck turn times, says Ackerman, although it has proven highly effective in some European examples. “In Brussels, once they got scale, they saw 30% reduction,” he adds. DFW has picked Nallian as the provider of its CCS, the same as is used in Brussels and where truck slot booking was a key motivation to persuade companies to participate.

But DFW’s airport management is looking to bring on more CCS features over time. “We have a rough road map. Ultimately this will be driven by the community,” says Ackerman. A pick-up and delivery app would be useful to complement the slot booking function, he adds.

For Stephanie Wear, director of air service development at Philadelphia International Airport (PHL), truck staging is one of the main priorities in her plans to set up a CCS, but she aims for broader functionality down the road. “We hope this can help us with several things. We will outline the details in the RFP,” she says. The airport authority aims to have a contract up and the CCS under way within nine months.
Advance shipment information
“The next step in line with the pandemic is look at e-air waybill and advance shipment information,” said Kale’s More.

He points out that there is an abundance of functionality harboured in CCSs. Kale has 124 use cases of digitalisation in its platform, from advance shipment information and temperature tracking for pharmaceuticals to electronic booking, electronic dockets and electronic certificates of origin.

He likens the array of options to a buffet, adding that usually adoption happens in stages. “If you do everything together, clients are overawed,” he says, adding that this company will launch at least four to five use cases this year.

Interest in AI mounting
Interest is mounting in artificial intelligence to make better use of data. Kale has built AI into its platform, but developments so far barely scratch the surface, More said.

“There is so much more data that’s available for use for machine learning,” agrees Glen. Menzies and partners have begun to work with universities to get a better idea of the possibilities involved.

HACTL is moving in a similar direction. “We will examine the feasibility of applying data analytics to generate actionable insights on real-time operations,” remarks Kwong.

While CCSs are set up to speed up the flow of data between the members of the community, increasingly people are looking to them to serve as conduits for flows with other communities. The concept of a data and logistics corridor is gaining ground.

“The next step for CCSs is to link with other airports,” comments Stan Wraight, president and CEO of Strategic Aviation Solutions International.

Linked communities
The first such corridor that Kale set up was between Mumbai and Amsterdam. “It is necessary to have community platforms at both ends,” says More.

Wraight describes the concept as a critical element for airlines to develop high-yield traffic, based on the fact that a flight between two points offers the fastest possible transit time that no integrated express carrier can match, provided the services on the ground are up to speed. To organise ground services and processes so incoming cargo is moved within hours instead of days, automation and unimpeded flow of data to all stakeholders is key. If those at the receiving end know what cargo is headed their way and whether or not there are any delays, they can allocate resources accordingly and move the cargo faster, Wraight points out.

Airports like DFW and PHL are moving in this direction. “This ties in with our bigger strategy to link with other airports,” says Wear.

Pharmaceuticals shipper base
Philadelphia has a large pharmaceuticals shipper base and wants to build a data corridor to other gateways for this traffic – first in Europe, but also in Asia and Latin America. Overall, the airport is looking to cultivate premium cargo, where an improved and accelerated flow of data can make a significant difference.

According to More, the development of a data corridor goes through two stages. In the first, all the dark spots in the supply chain have to be eliminated to achieve better visibility. The second stage marks the actual transfer of shipment documents. “That’s really transformational,” he says.

Government incentives
The pandemic has induced government agencies to move more document requirements from paper to electronic formats, he observes, citing the Indian government’s decision to shift the clearance process from stamps on paper to an electronic method, which uses community platforms to get certain information. Likewise, the authorities now accept an electronic version of a certificate of origin.

The rise of cybercrime has raised concerns over data security in an interconnected world. By their nature, CCS seem potential targets that could disseminate viruses across many systems. But Kale has built in robust defences, says More.

“First and foremost, we leverage the seven layers of security provided by established cloud providers like Azure,” he explains.

Leyssens is philosophical about the issue. “As everyone is more interconnected, it is one of the risks that we continuously need to manage,” he reflects. “We are able to manage security from a central platform. We don’t have systems running on local servers. That’s easier to protect.”