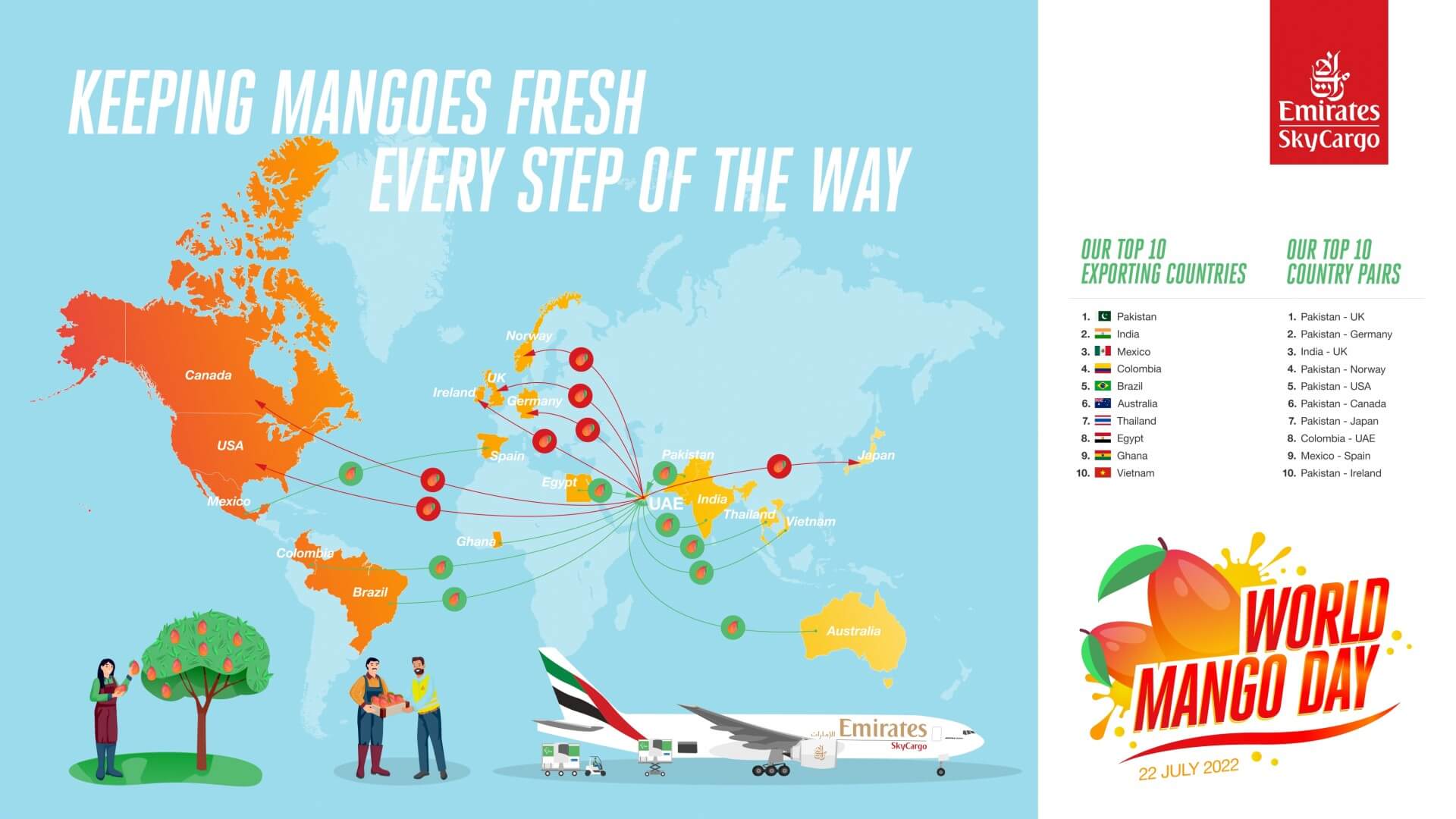 Compared to the previous year, Emirates SkyCargo flew 30 per cent more mangoes during the 2021 season, with the airline expecting similar volumes again by the end of this year’s mango season.

The lion’s share of mangoes flown by Emirates SkyCargo originate in South East Asia, supplemented by South American mangoes filling the cargo hold of Emirates’ passenger planes and freighters from Mexico, Columbia and Brazil, the majority of which are destined for the UK, Spanish and UAE markets.

The airline also helped Australian producers export over 100 tonnes of mangoes this year.

Taking Pakistan as an example, in many cases it takes only 48 hours from when the mangoes are picked on the farm to the moment the fresh fruit boards the departing aircraft.

Add another 14 to 18 hours in transit and they will have reached the supermarket shelves at their final destination, as fresh as they left the farm.

Emirates SkyCargo flew over 6,500 tonnes from Pakistan via Dubai to Europe and North America.

Nearly 80 percent of the cargo leaves Jinnah International Airport in Karachi and the remaining 20 percent departs from Lahore.

The cargo is loaded into the belly-hold of Boeing 777s, which fly 31 flights a week between Dubai and the two cities.

Transiting through the Emirates SkyCentral facilities at Dubai International Airport, the delicious fruit is always stored in state-of-the-art Cool Dollies during ground transportation, before being sent to their final destinations.

The UK received the largest percentage of imports via Emirates’ hub in Dubai, with over 3,600 tonnes of fresh mangoes.

Germany’s appetite for the sweet fruit was also healthy, receiving nearly 700 tonnes, followed closely by the UAE with almost 500 tonnes having been imported through Emirates SkyCargo over the past year.

The precious cargo was also sent directly to Spain from Mexico on board Emirates dedicated Boeing 777 Freighters.

Dennis Lister, VP Cargo Commercial Development, Emirates SkyCargo said: “The success of our three-tiered Emirates Fresh product is clearly demonstrated by our continually growing volumes, as well as by our customers’ confidence in repeatedly choosing us to keep their fruits healthy, their meats fresh and their flowers blooming as they travel the world with us.

“With our class leading integrated cool chain processes, expert personnel and temperature-controlled storage, customers all over the world are guaranteed freshness that they can touch, taste and feel.”