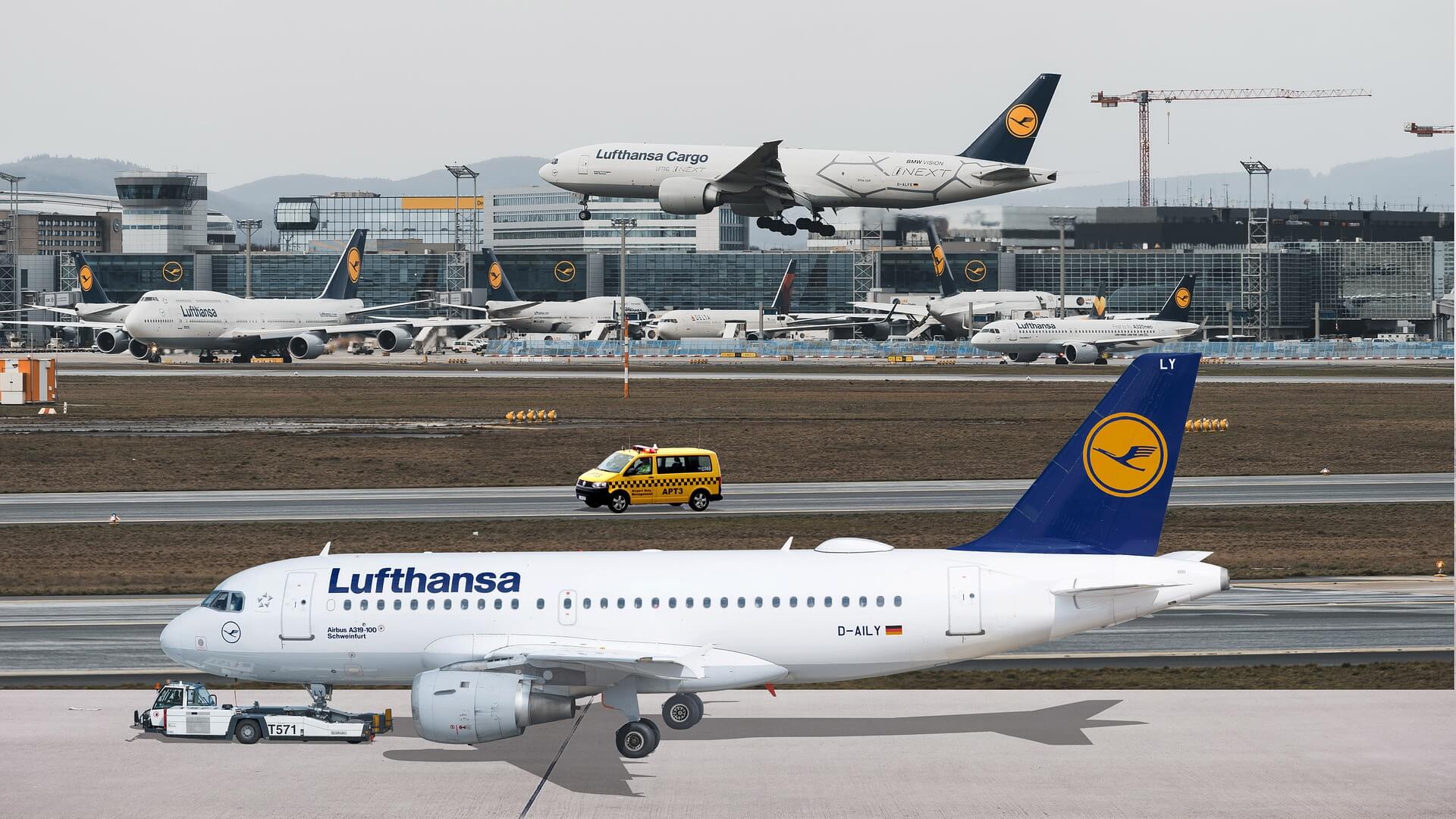 Global air cargo volumes fell again in June, down 8% year-on-year, with additional summer airline capacity continuing to apply a downward pressure on airfreight rates, especially on the North Atlantic which has seen a 30% decline over the past three months, according to the latest weekly air cargo market intelligence from industry analysts CLIVE Data Services, part of Xeneta. 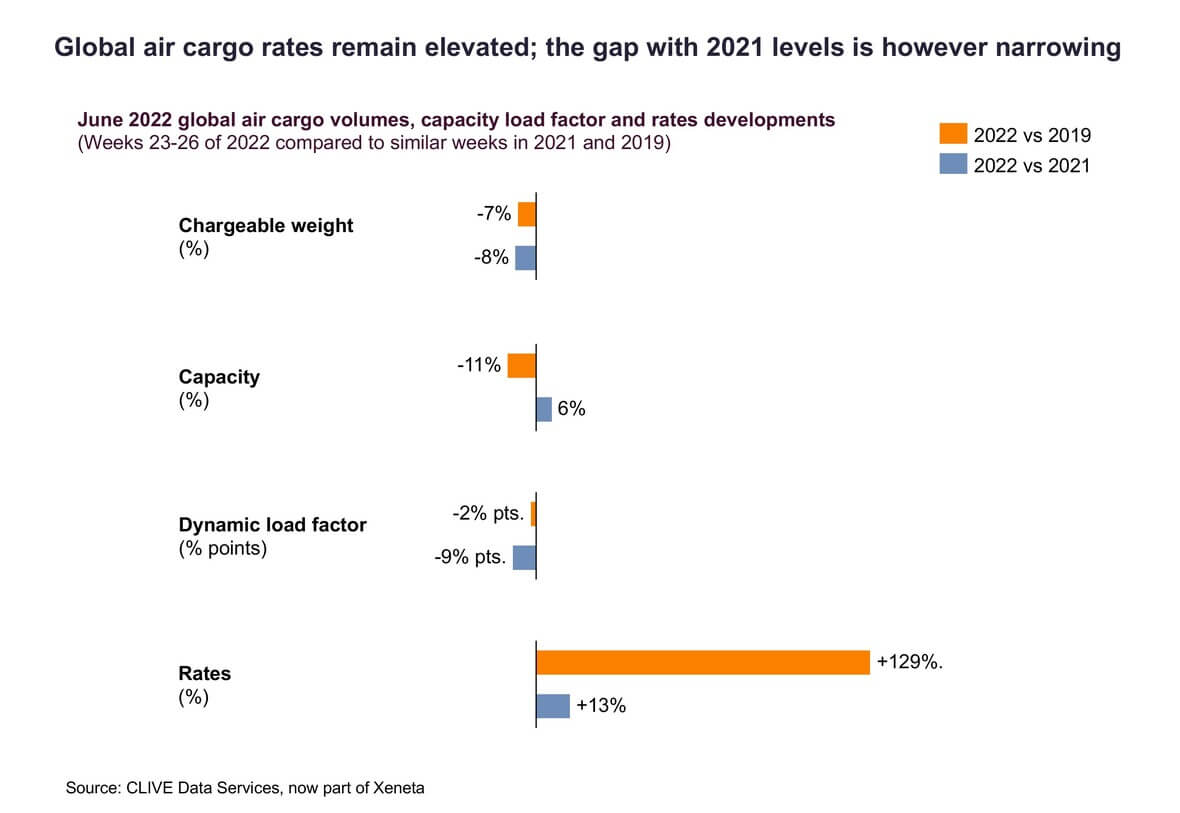 Demand in the general airfreight market in June was -7% compared to 2019 and follows the -8% drop in volumes reported by CLIVE for May 2022.

Available cargo capacity in June rose 6% over the same month of 2021 but remained -11% down on the 2019 level. The ‘dynamic load factor’ for the month – based on CLIVE’s analysis of both weight and volume perspectives of cargo flown and capacity available to produce a true indicator of airline performance – was 59%, 9% pts lower than in 2021 and 2% pts adrift of June 2019.

“In our analysis of air cargo market performance in May, we said the North Atlantic market could provide ‘a test case for the direction of other markets once they also return to their pre-Covid levels.’ This is still true, and we may see the consequences sooner than we anticipated a month ago. General North Atlantic airfreight rates dropped by around 30% between the first week of April to the last week of June. This brings these rates very close to the 2020 levels. If we just look at the Spot market, the rates are already lower in the last two weeks of June 2022 compared to 2020 by around 5% and the market has yet to bottom out. This will be causing some interesting soul-searching for airlines and forwarders,” said Niall van de Wouw, founder of CLIVE and now Chief Airfreight Officer at Xeneta.

“While flights ex Asia to the US and Europe remain relatively full, we are seeing a subdued North Atlantic market, largely due to more capacity. We have to consider what will be the knock-on effect of a softening air cargo market? Will carriers deploy their freighters to other markets in Asia Pacific, Africa, or South America? We are already seeing some freighter redeployment in the market.It will also be interesting to see the reaction of forwarders that have secured air cargo capacity directly with airlines or through charter brokers or ACMI providers because, in a softening market, more options are available. They were willing to pay a price for reliability and their own control, but they may now be considering how much cheaper it could now be to use commercial airline capacity. And, has the ‘cost of living’ crisis even started to kick-in yet?” he continued.

Rising cases of Covid will be another market concern, he said, as is the continuing struggle to tackle the people drain in the aviation and logistics industries. He pointed to reports of restrictions on freighter operations at Frankfurt Airport due to labour shortages as well as the recent study by IRU, the international road transport, which shows 2.6 million truck driver vacancies went unfilled in 2021 and forecasts a worsening situation in 2022. Relatively low wages and poor working conditions for some workers on the frontline of supply chains, van de Wouw said, means “we won’t see this struggle disappear anytime soon.” 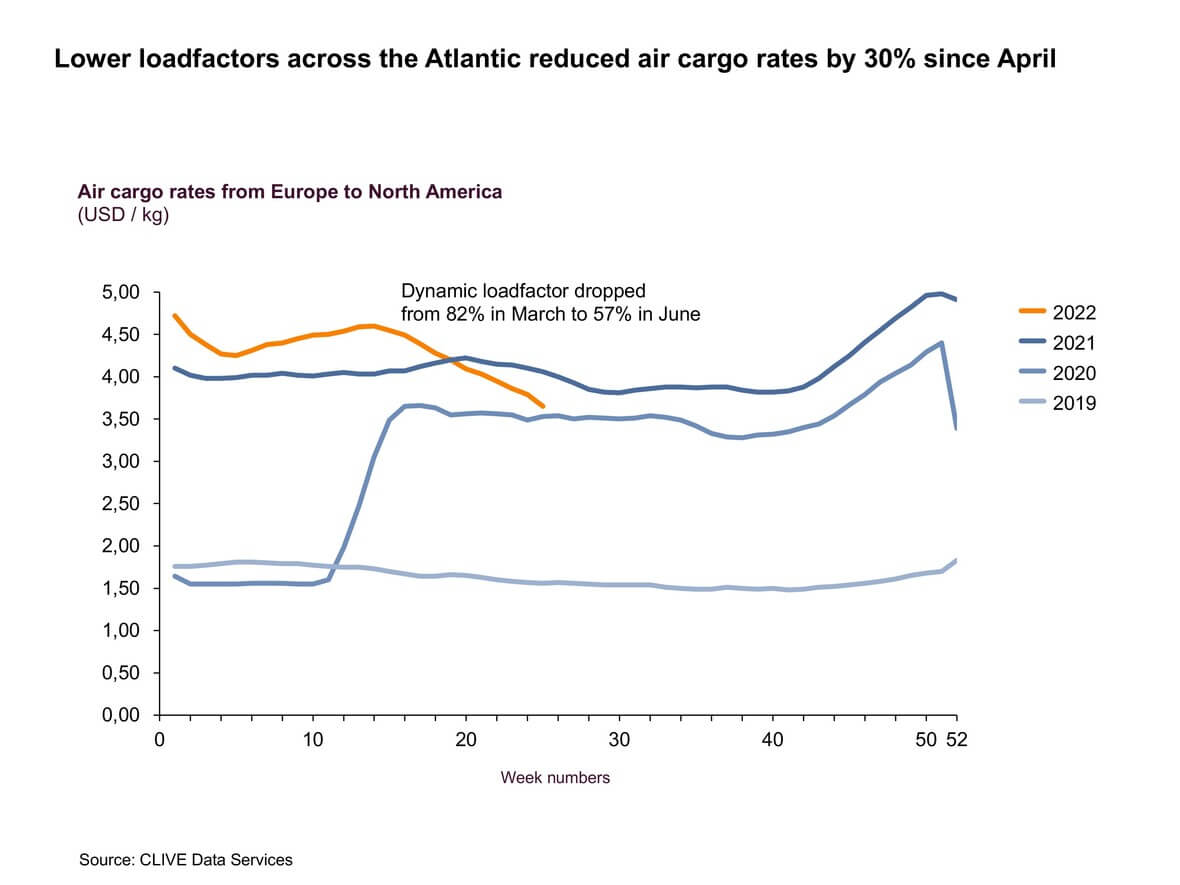