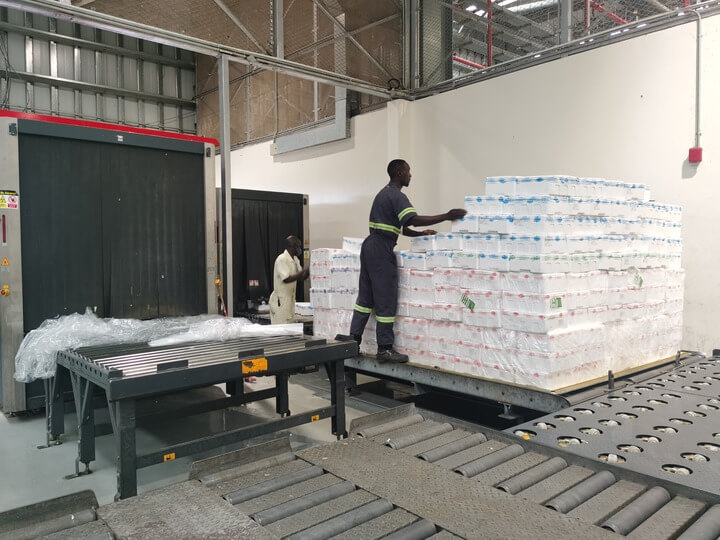 The modern facility is part of the expansion and upgrade of the airport, a 200-million-U.S. dollar project financed by the Import-Export Bank of China.

Jiang Jiqing, the commercial counselor at the Chinese embassy in Uganda, described the facility as state of the art, saying it has the capacity to facilitate Uganda’s exports, especially in the agricultural sector, which is the country’s key economic activity.

“It is so impressive to see that steady progress has been made, we all know that Uganda is very eager to export is premium agriculture products to the outside world, to neighboring countries,” Jiang said Friday, after a tour of the center, which is 40 km south of Kampala, the Ugandan capital.

Jiang is optimistic that Uganda and China would use the center to improve their trade relations further. “I expect when the cargo center is put to full function, our trade relations will increase,” she added.

Vianney Luggya, the spokesperson of Uganda Civil Aviation Authority (UCCA), the state regulator of air transport in the country, said the new terminal replaces an old cargo terminal that was originally a hangar.

Luggya said when it is fully functional, the new facility will accommodate 100,000 metric tons of cargo per year compared to the old one which had a capacity of 50,000 metric tons per year.

“We are seeing that exports are increasing more than imports, which is good for the country. The bulk of Uganda’s exports are mainly fresh produce which are flowers, fish and vegetables. The cold storage in the new facility can help that fresh produce to be exported to foreign markets,” Luggya said.

Martha Okweyo Agaba, an architect with the Dar Al Handasah, the monitors of the airport upgrade and expansion project, described the works at the cargo center as high quality and up to international standards.

Agaba said while the works at the cargo center are complete, other upgrade and expansion works at the airport with a history of more than 70 years are still ongoing. The UCCA anticipates that the first phase of the works will be complete in the next 24 months.

The construction, which is under the Belt and Road Initiative, started in May 2016 and is now at a 76 percent completion level. According to China Communications Construction Company (CCCC), the project contractor, it is scheduled to be implemented in two phases. The first phase, with three-quarters finished, involves the construction of a new passenger terminal, a new cargo complex, and upgrade of two runways and their associated taxiways, rehabilitation and overlay of three tarmacs.

According to the UCAA, there are ongoing discussions regarding the financing and implementation of the second phase.

Li Qinpu, the project manager of the CCCC, said at the peak of the construction of the cargo center, the project employed 80 Chinese and more than 900 local employees at different skills levels, adding there were skills and knowledge transfers among the Chinese and local employees and construction materials were locally purchased with the exception of those that cannot be locally made.