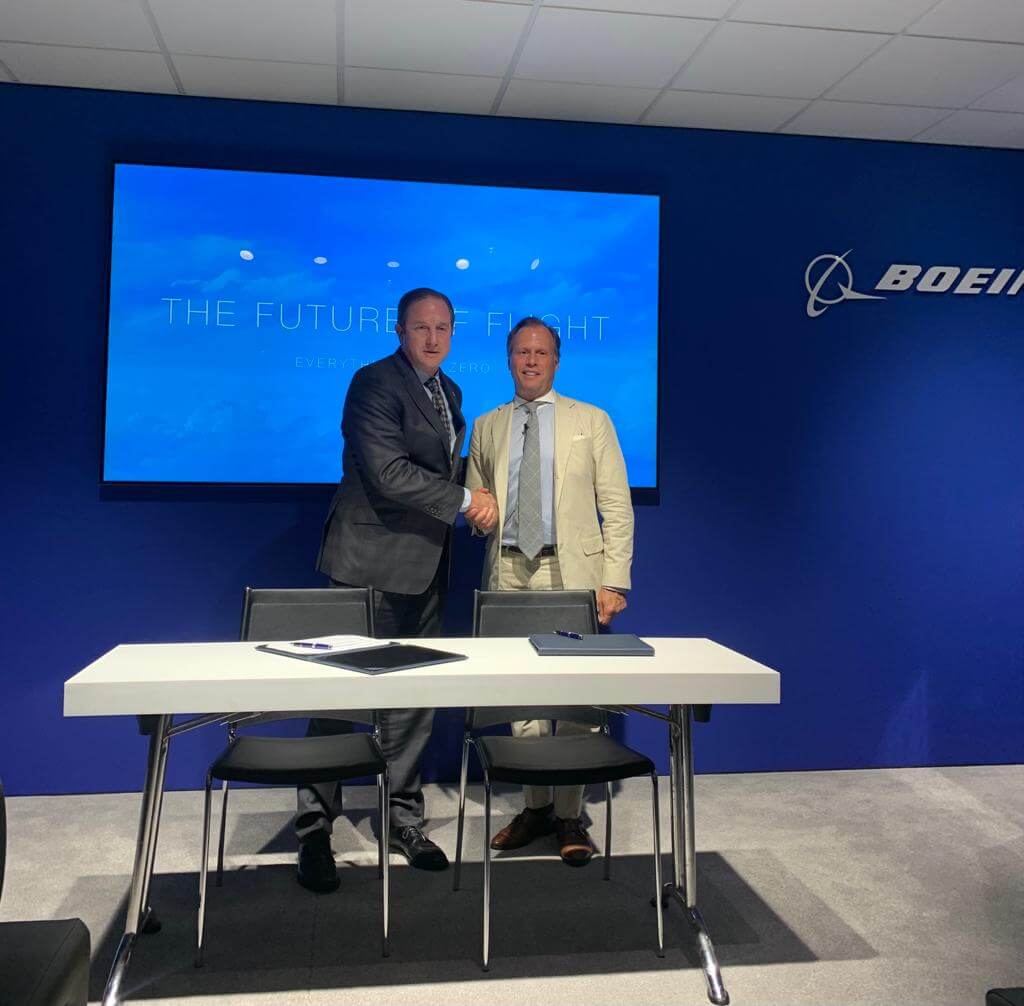 Boeing and Alder Fuels today announced a new partnership to expand production of sustainable aviation fuel (SAF) around the world. Using Boeing airplanes, the companies will test and qualify Alder-derived SAF, advance policies to expedite the transition to renewable energy in aviation, and grow the amount of SAF for the global aerospace market.

Alder Fuels’ proprietary technology enables the efficient conversion of abundant, sustainable forest residues and regenerative biomass into a low-negative carbon “greencrude” for jet fuel conversion. The Alder product is suitable for conversion into drop-in SAF, meaning it can be produced by existing refineries with their current equipment and infrastructure. Alder expects completion of its first plant in 2024.

“As we work toward the civil aviation industry’s commitment to net zero carbon emissions by 2050, we know that 700 – 1,000 times more SAF is needed in order to meet this goal,” said Sheila Remes, Boeing’s vice president of Environmental Sustainability. “We also know that according to the U.S. Department of Energy, U.S. forestry and agricultural residues alone could provide enough biomass energy to generate enough SAF jet fuel to displace 75 percent of U.S. aviation fuel consumption. Partnerships like those with Alder enable us all to advocate for and scale SAF supply.”

Boeing will support testing and qualification of Alder-derived SAF including flight demonstrations to ensure readiness. According to the Air Transport Action Group, an industry coalition focused on sustainability, the single largest opportunity to meet and go beyond the industry’s 2050 goal is the rapid and worldwide scaling up of sustainable aviation fuel and new energy sources.

In January 2021, Boeing committed to deliver 100% SAF-capable airplanes by 2030 and is also using SAF in its own operations while working across the globe to scale up the supply of SAF.

“Alder’s technology offers a future of gathering energy to power aircraft, instead of drilling for it, by converting widely available sustainable biomass into a sustainable product for refining into SAF,” said Alder Fuels CEO Bryan Sherbacow. “We can now scale up supply to meet the aviation industry’s demand. This partnership with Boeing will expedite SAF availability around the globe, advance policies that ensure sustainability and foster environmental justice, and cultivate local economies.”

Prior to founding Alder Fuels, Sherbacow developed and led the world’s first SAF refinery in Paramount, California. The Alder Team has been at the forefront of developing new methods for producing SAF, commercializing its use, developing public policy for the sector, and leading efforts for widespread industry adoption.

Boeing has been a pioneer in making SAF a reality. The company has worked with airlines, engine manufacturers and other industry leaders to qualify and conduct biofuel test flights in 2008 and gain approval for commercial use in 2011. In 2018, the Boeing ecoDemonstrator flight test program made the world’s first commercial airplane flight using 100% sustainable fuels with a 777 Freighter, in collaboration with FedEx Express. In addition, Boeing partnered with U.S. government customers on SAF initiatives which include SAF flight tests with the U.S. Navy on an F/A-18 Super Hornet and with an in-depth fuel study with the Air Force as part of their efforts to certify the C-17 Globemaster to use SAF.