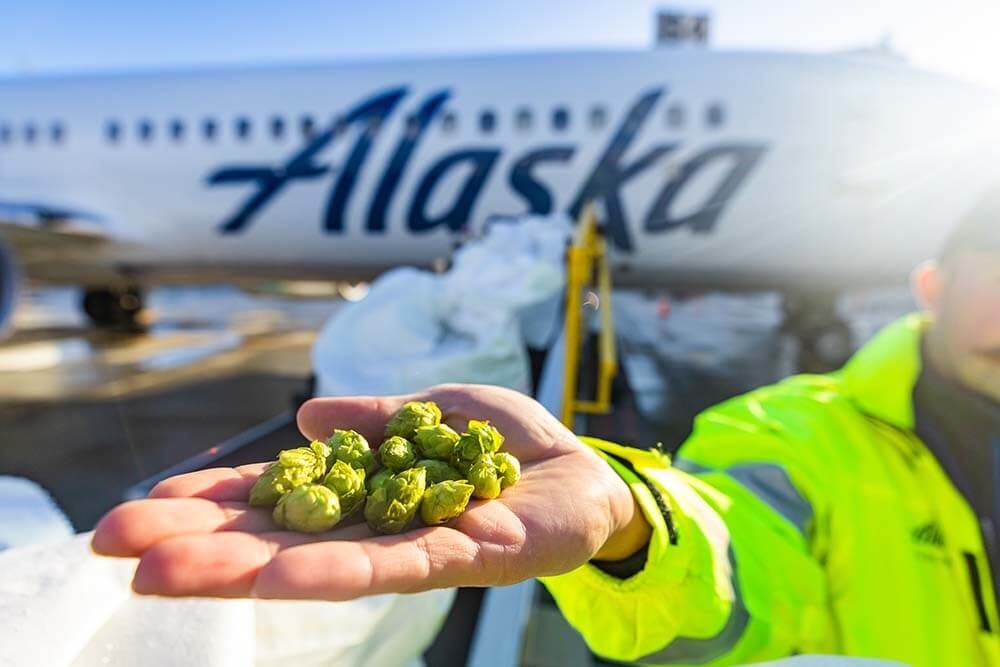 This fall, Alaska Air Cargo delivered the industry’s first and biggest fresh hops run to breweries in Maui and Anchorage within 24 hours of harvest – this was a huge logistical hop-eration that brought a favorite seasonal beer beyond the Pacific Northwest.

Made from fresh-plucked, undried hops that are typically rushed straight from the fields to the breweries, Alaska went further than any U.S. commercial airline has before by delivering more than 1,200 pounds of fresh hops to Maui Brewing Co. in Hawaii and 49th State Brewing in Alaska.

“This is a potential game-changer for the craft beer industry and farm-to-glass collaboration at its finest,” says Adam Drouhard, cargo managing director for Alaska Airlines, noting that Washington state grows almost three-quarters of the U.S. hop crop.

“This puts a Northwest agricultural product in places that don’t normally get it. With the size and scope we have in Seattle, we are really positioned to own this.”

It all started with a deep appreciation of fresh hops beer and connecting the dots that Alaska Airlines could be the key to sharing it with the world.

Jake Spotts, postal affairs manager on Alaska’s cargo team, has tried beers all over the world during his 20-year Air Force career – but says there’s nothing better than the taste of fresh hops during harvest.

Packed with unique floral flavor, fresh hop beers are usually made during the late-summer harvest by breweries located near farms in Washington, Oregon and other places in the Northwest.

Craft brewers thrive on collaboration, and when the opportunity came to ship a large volume of fresh hops out of state, Yakima-based Bale Breaker Brewing Company helped us get the idea off the vine.

The brewers at Bale Breaker, Maui Brewing Co. and 49th State worked together on beer recipes to highlight the hops’ fresh flavor and coordinated logistics with the Alaska Air Cargo team and Yakima Chief Hops, a grower-owned organization that distributes hops for more than 50 farms across the Northwest.

“Scalability of shipping fresh hops has really been the challenge to overcome because you only have about 24 hours from harvest before the hops start to degrade,” said Bryan Pierce, Chief Sales and Marketing Officer for Yakima Chief Hops.

To keep the hops fresh throughout their journey, the harvest was timed perfectly so that the just-picked hops could be bagged onsite at Loftus Ranches, one of Yakima’s longest running family-owned hop farms and the site of Bale Breaker Brewing.

From there, they were loaded into refrigerated trucks and driven to the Alaska Air Cargo offices at Sea-Tac International Airport just in time to load onto the aircraft. More than 1,200 pounds of hops were shipped nonstop to the brewers.

On Maui and in Anchorage, the brewers were ready to add the fresh hops to the “boil” – the first stage in beer – as soon as they arrived.

“Making beer is a culinary art, and we’re all about making these ingredients really shine.”

“Using Alaska Air Cargo, we can guarantee the supply chain all the way from field to the kettle,” said David McCarthy, co-founder of 49th State Brewing.

“Aficionados of beer are really looking for this flavor, and we’re excited we can now make the freshest beer in Anchorage and the whole Alaska market.”